War of the Worlds - "War Machine" 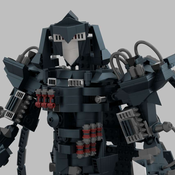 After sweat and tears, I give you the Famous War Machine from the classic Sci/Fi movie, "War of the Worlds, 1953." A Lego set that I believe any fan of the movie would love to have.

I was going to make this a small set, but I truly wanted to have the ability to carry minifigs. So I did enlarge the main body, to accommodate four of them. Also built interior components to imitate alien systems and such.

I try to include several angles and a close-up shot of the pilot seats.

In order to open up the side panels to expose the ship interior, the center spine that also holds the main weapons eye has to be removed, which I have made to do, easy.

This is a large set and well over 100 parts. I would have changed the color of the bricks to match the color of the ship, but the LEGO DD did not have the same colors I needed, so I render it in basic grey.

I hope someday this proposal becomes reality, Thank you.