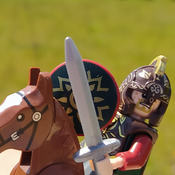 By Zagubiony W Krainie Lego
28 comments
Welcome all fans of Lego bricks, today I prepared for you a project called the Castle of the Golden Kingdom.
It is a set of fortresses besieged by barbarians armed with battering ramwhich the knights defend. It has 679 pieces, including 12 minifigure armed with crossbows, bows and axes. The castle has plenty of food prepared for a long siege.
I built it because I love castles, knights and Lego blocks and combined these three hobbies.
It would be a great Lego set because it has many functions, such as a ram that can open the gate and the catapult, also because it has many minifigures.