The Royal Game of Ur 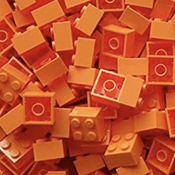 The set is a recreation of a game called “The Royal Game of Ur” or sometimes just “The Game of Ur” or “A Game of Twenty Squares”. The game is a 2 player race game and is thought to be around 4500 years old.

The set contains a board, a set of 7 white pieces and a set of 7 black pieces (one set for each player, with each piece being a 1x1 round brick) and 4 dice-like pieces. The board can be opened and all of the pieces and dice stored inside. The pieces can also be attached to the squares on the board, meaning they won’t fall off and the game is very easy to transport.

The model is made up of 167 pieces (166 if the two plates used for the base of the model are replaced with a single 6x16 plate) and the dimensions of the board are, to one decimal place:

There are some variations on what the rules are believed to have been and the route it is thought players are supposed to take, but a basic and fairly common set of rules for the game is as follows: