This is my coordinated series of sailing ships, a beloved theme and one of TLG's most successful ones.

But where's it gone? We await the return of these awe-inspiring legends in Lego form!

Thus I ask that you support my trio of sailing vessels in the hope that a great theme can be revived!

Welcome to my largest model design on CUUSOO, The Stallion!

First of all, I expect that many of you viewers who have been drawn to this project by a love of the beauty and majesty that sailing ships have, Lego Pirates (and Pirate ships) has always been a popular theme with AFOLs (adult fans of Lego) and young collectors alike. With adventure, chivalry and daring deeds, Pirates is like Lego Castles on the sea. This project is ultimately trying to encompass this effect in what could be the largest official Lego set of a sailing ship ever built!!

(I apologize if I now waffle a lot, but bear with me, please!)

Undoubtedly, this might appear to be simply a larger, more cannon-packed version of the legendary Imperial Flagship, however in this design I hope to enhance some of the factors which were lacking in that particular set, to produce what would be an general representation of a mighty treasure galleon from an earlier era. It has a different colour scheme and is an armed cargo ship rather than a warship.

(Not so) Basic Description:

Basically, the idea is that The Stallion would feature: a magazine portrayed as reaching below water level (the lowest deck) with stores and treasure, a "heavy" cannon deck above, reaching back to the stern (the end of the ship), nestled in the bow (the front) would be the ship's galley; a small eating area and the kitchen above with the two forward cannons. At the prow (the very front) the figurehead would be one of the new Lego horse pieces (not yet on LDD) with the hinged hind legs, behind which would be the forecastle, with two rowing boats, followed by a middle deck with 6 "light" cannons, brick-built, and containing 2 officers' and the captain's cabins, topped off with the poop deck and the ship's wheel. In my version there are fully 22 cannons on the vessel, 12 Heavy and 10 Light.

You are not deceived, the masts to the fore (front) and aft (back) of the ship are supposed to be leaning, in relation to genuine treasure galleon design.

Naturally, in hindsight I should have constructed my model to have a modular design, but I think that's best left to the experts at The Lego Group!

Here are some pictures to give you a better idea of my proposal: 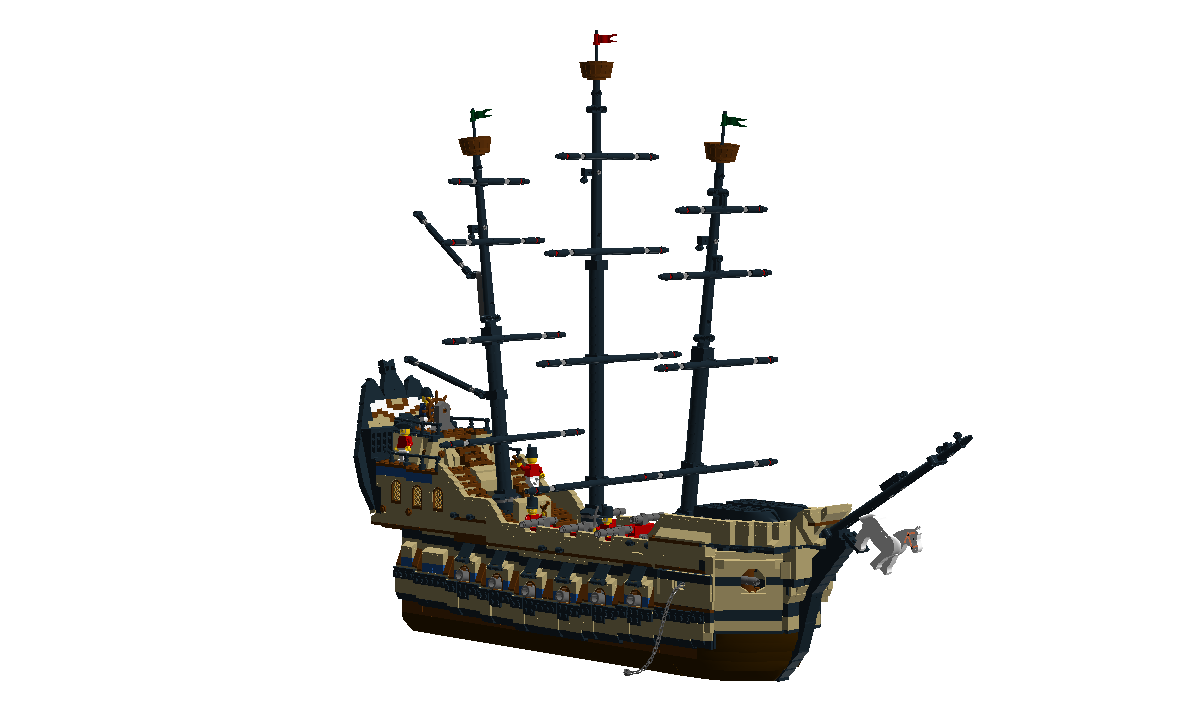 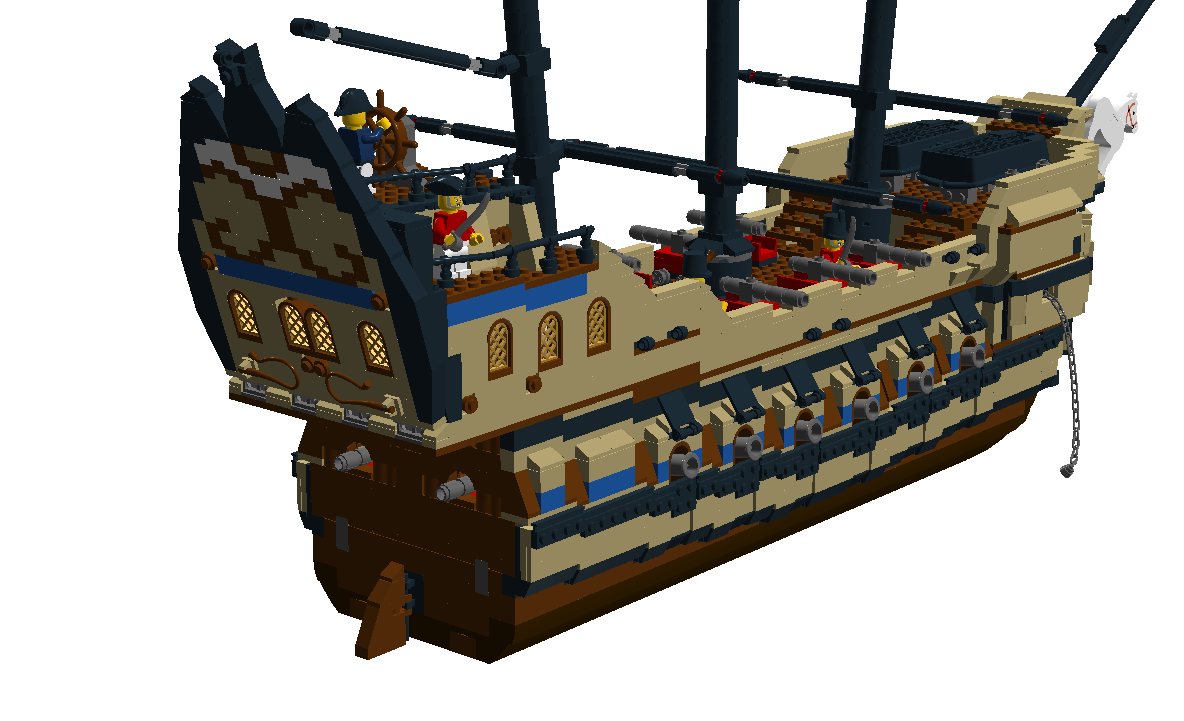 In this image you can see the light cannons which are present to catch out any enemy vessels which are in following, and also the decorative features above them. 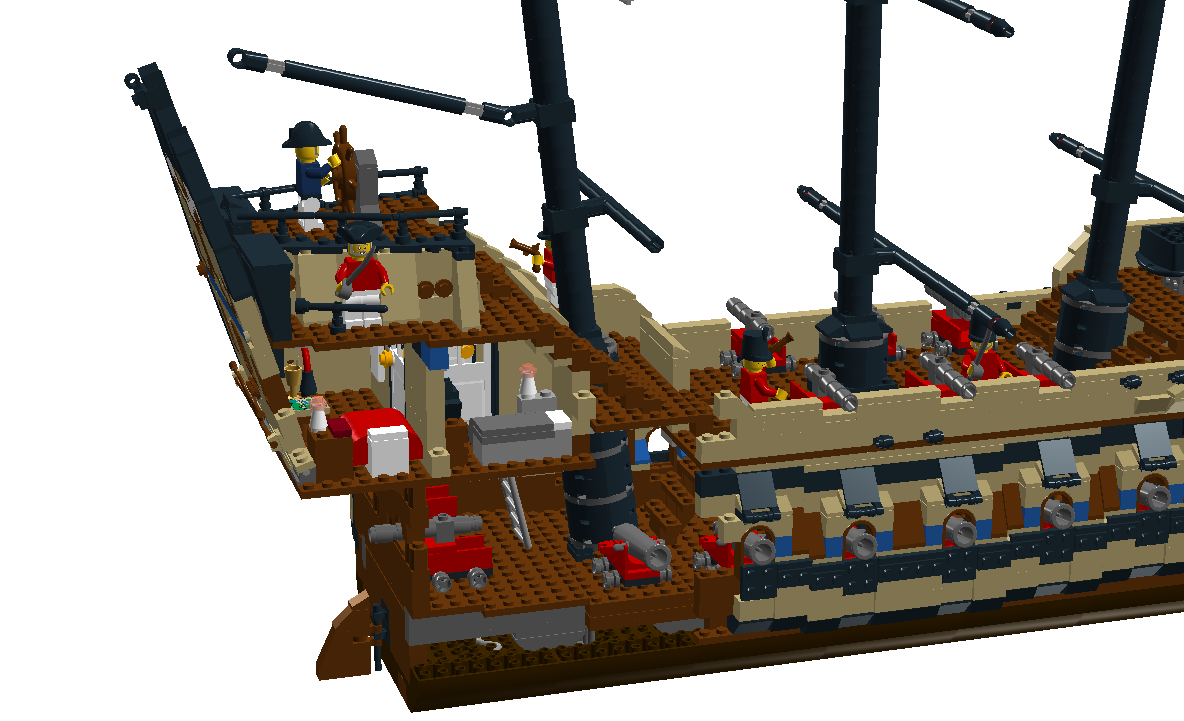 Here is a cutaway showing a glimpse of the small prison in the hull, the rudder, along with the captain's cabin (with colourful bed and desk) and an officer's neighbouring cabin. 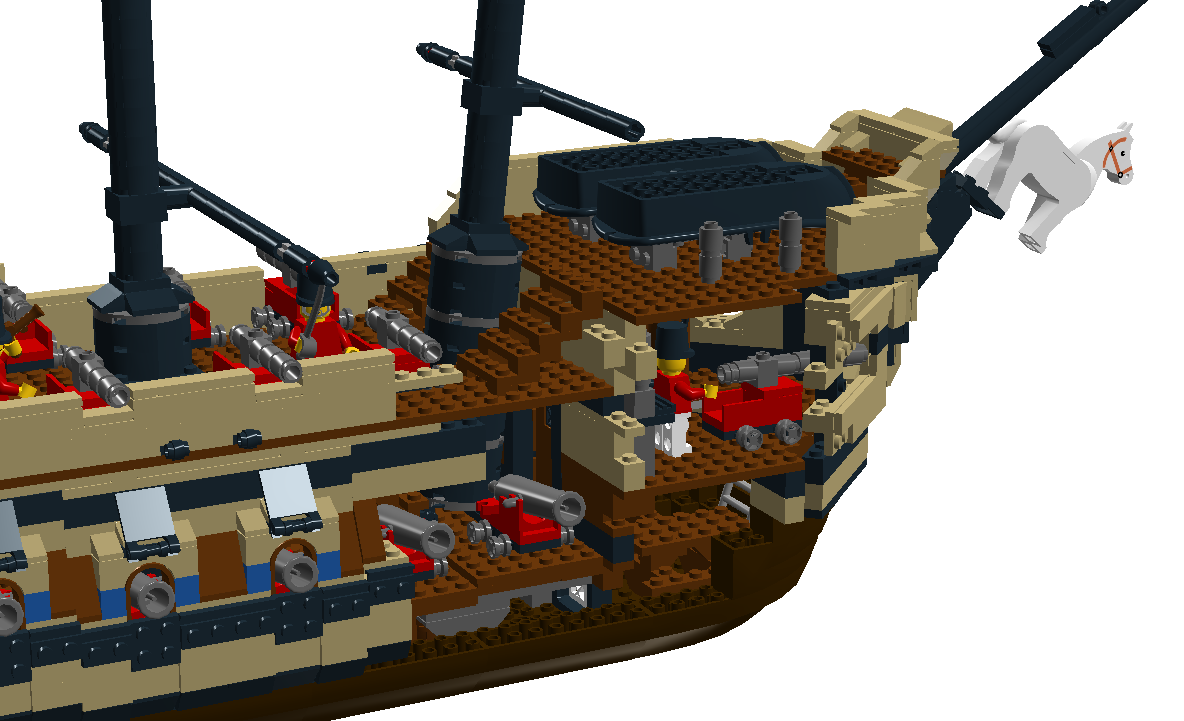 Finally, here is a cutaway of the front, observe the eating area which is tucked away to the right of the cargo deck with a ladder leading up to the kitchen with the open fire partially visible next to the Imperial soldier.

As I'm sure you've noticed, I enjoy exploring my models in detail, and here it is, the biggest of them!

If you fancy one, support, I've tried to point out as many nice features as I can that you could think about, you know!

I know beige is a relatively rare colour, but to give this design flair and originality, and to make it less alike to the Imperial Flagship, I would like to give it a new colour scheme, based on your suggestions.

I have promised a crew to those of you who helped this project reach 50 supporters,quite some time ago, and I apologize to you for neglecting to present one. On the other hand, I have been hard at work over a project concerning 50 years of the most fantasmagorical film in the history of everything...a certain...car...

My thanks to WipeoutZone for his fab rendering of the main image! It also makes an awesome desktop background for my PC!

PS. On a more personal note I can happily say that I have used some SNOT (studs not on top) building to achieve the nice, curved structure along the main cannon deck.

PPS. If you have extensive knowledge of a maritime nature, please tell me if I have misused any terms. Thank you!