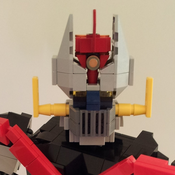 Hi everyone, this is my second project and I hope you like it.

I present the Lego Spaceships carousel.

I designed it with Lego Digital Designer.

It has 8 articulated arms and a mechanism to rotate.

It's composed of 8 mini-spaceships that have made the success of Lego:

I leave you now admire pics and thank you for your support.