By Xendor
8 comments
The Great Beings are returning, now that Mata Nui has restored Spherus Magna. However, a mysterious figure has gotten there first, and rumor has it that she's after the Great Beings. To discover what's going on, the Great Council has sent one of their wisest members, Galtok, to find Angonce and talk with him.

Sitting at the right hand of the ruler of the Great Beings, Galtok is a highly respected member of the Great Council, using his wisdom to peacefully end any tension between them and others they encountered.

Creator of the Mask of Wisdom, Galtok left it in hopes that it would help in ending all violence. However, Angonce warned him that wisdom cannot end pure hatred. Recognizing Angonce's wisdom, he convinced the council to have Angonce remain behind. 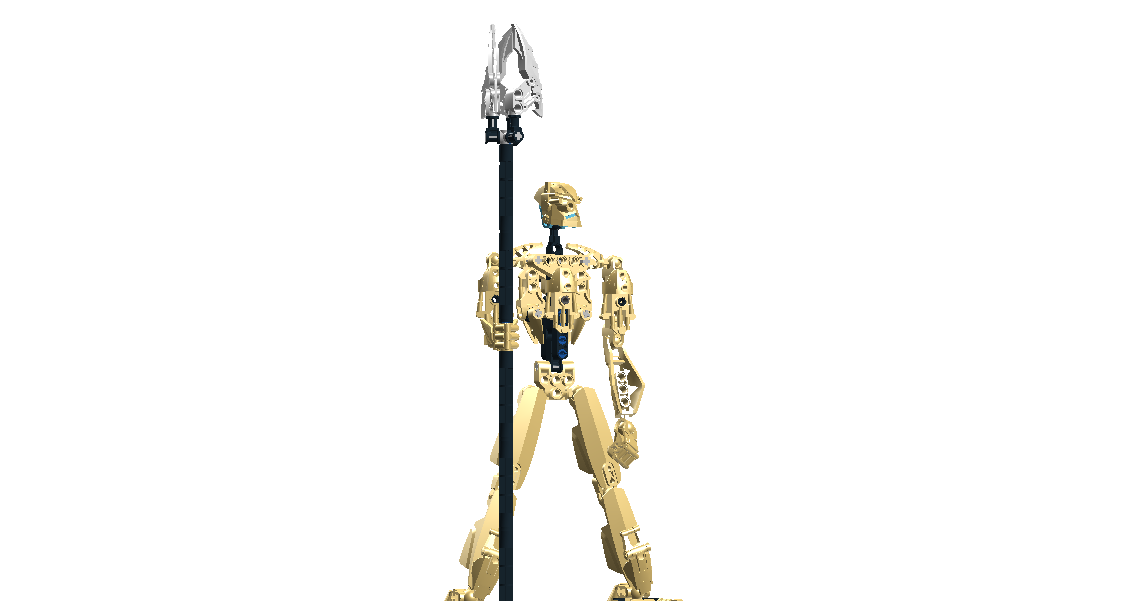 Galtok uses his wisdom in more than just conflict. He also has helped the Great Beings in their travel through space to make sure that everything was shared, equally and happily. If someone were to question his decision, he would take him aside and ask him what was going on, in order to figure out how to appease everyone. 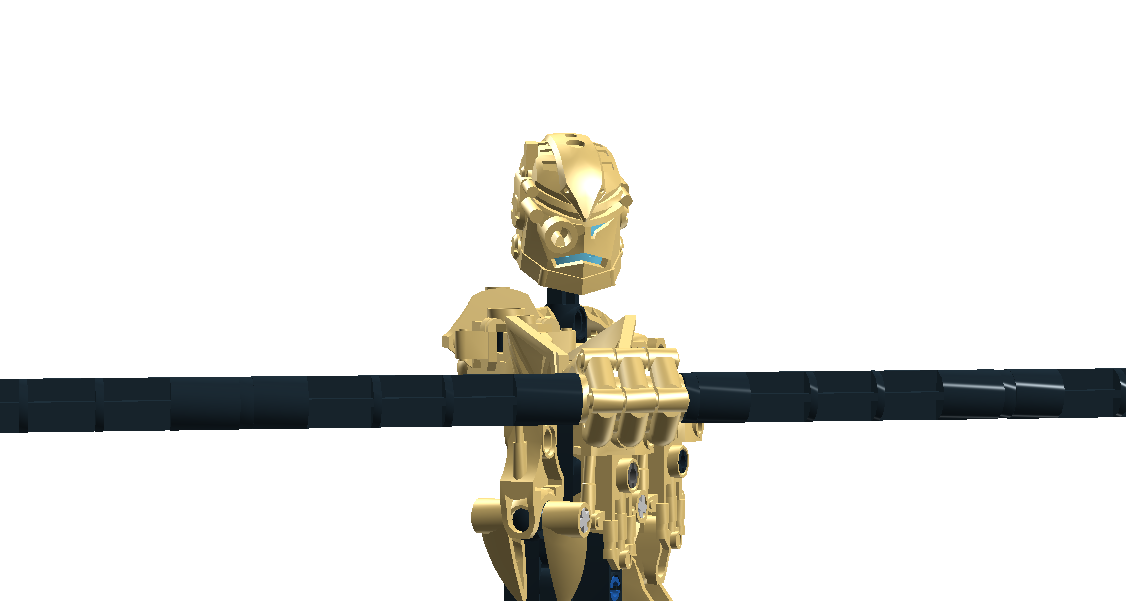 Despite Galtok's preference of peace, he acknowledges that war is often inevitable. So he keeps his skills up, dueling with anyone who challenges him. Using grace and balance as his fighting style, he prefers to tire out his opponents instead of pushing them. His unusual trident is an elegant tool, as many in the audience can tell you. The unusual placement of the blades creates a beautiful affect as they are twirled around. 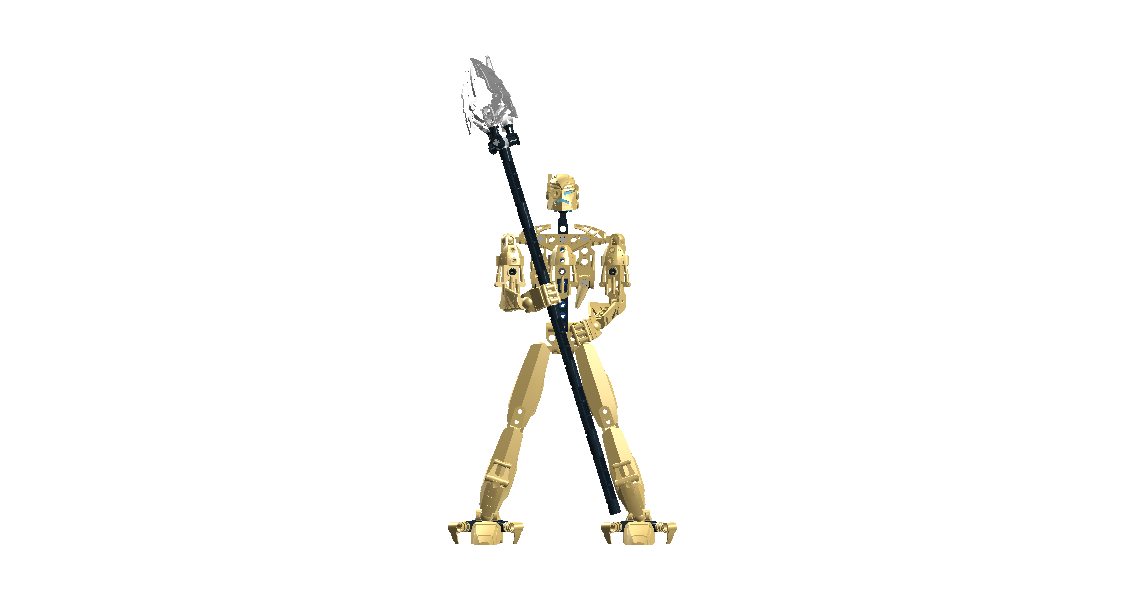 I hope you enjoyed this set. As you may have noticed, in the main image he's wearing a brown cloak. This was added using paint, but if this set were released it would come with.

Now for Bionicle: The Return.

It has been seven weeks since the Mask of Life disappeared, and many are starting to get worried. Nokama had just sent a message to all the council members yesterday for an important meeting, but still many weren’t assured. Even Vakama disappeared for a while (to tell the Visorak the meeting was post poned).

Including a certain Toa named Jonn, who today has organized his friends: Guanka, an apprentice of Gaaki, and male Toa of water; Clarrik, apprentice of Bomonga, whom we ran into in Chapter 1; Shycle, a female Toa of ice; Coldarma, who goes by Bolder, his Kolhii sports name of Team Brown; and Tayr, Toa of air.

Jonn: Well, we’re all here. Now one of you ask something, because I know that you all have the same question.

Coldarma: Is there any food?

Jonn: Guess not everyone. And no, we’ve got no food here.

Coldarma: Then why’d you bring us here?

Jonn: That’s the question I was looking for. You see, Toa Gali has been gone for way too long. And there has been no sign of the enemy. We need to do something.

Guanka: And what may that be?

Jonn: Toa Tahu used the Golden Armor to defeat the Rahkshi. According to Vakama, it contained a shear amount of power, much more than Tahu could control.

Shycle: And you believe you can?

Jonn: I’m not that stupid. But together we can.

Clarrik: You’re suggesting we steel the armor from the most sacred place we have?

Jonn: It was sacred because the Ignika was there. It is no longer there, so there is nothing sacred about it.

Tayr: Oh, come on Guanka, let’s go for an adventure! I for one would be honored to wear a piece of the Golden Armor.

Jonn left the house and began running to the Temple, with Tayr running giddily on his tip toes, and Clarrik checking all the roads to make sure they weren’t spotted.

Shycle: Guess we have to go after them.

Takanuva, Ignika, Angonce and a Dark Hunter were crawling on the dessert sand to the Chambers of Makuta.

Takanuva: You sure this is where he is?

Ignika: I’m sure. This new mask is not doing anything to hide his power.

Dark Hunter: He could be trying to draw you in.

They continued crawling for another few minutes. Then Angonce stopped.

Everyone surrounded where he was pointing. A pair of foot prints were planted together.

Ignika stared at the prints for a few seconds. Then he drew out his sword and sliced over the area. Suddenly, a black and blue striped Rahkshi became visible, screeching and collapsing, and missing its feet.

At the same time, Rahkshi of the same kind appeared all around them.

Takanuva: This is a new species of Rahkshi. They must be able to cloak themselves.

Everyone except Angonce jumped to the ground, while Angonce swung his blade, sending a blade of energy into each Rahkshi.

Angonce: We may have just exposed ourselves. Ignika.

Teridax: To think that the Toa of Light, the Ignika, Angonce, and the Dark Hunters are all together. No wonder why they refused our friend’s offer.

Akingi: Strange. Even with my telepathic abilities, I still can’t find her name in her mind.

Teridax: We might have to give her one, soon.

Akingi: She seems to relate better to Unknown.

Teridax: I wonder why.

Alarms were ringing outside of their house, and people were screaming. However, Trisa still didn’t know what was going on.

Since she was nine, Trisa’s father had been training her for war. At seventeen, she was nearly ready.

But it was too late.

Father: The enemy has launched every nuclear missile they’ve got. It’s a final attack.

Trisa: I thought we were invading their final nuclear base.

Father: They were using nuclear fumes to hold us back. Now, they’ve launched twenty nuclear missiles, and are reloading for…

His communicator on his wrist beeped.

Father: And another load coming. I think this is one last desperate shove.

Father: Our men haven’t gotten control of the system, but they have begun locating their targets.

Trisa: But Father, I’m not ready.

Father: We don’t have time. This project is set up for your physical form, and no other. And we’ve run out of time.

They ran into a lab, where her father placed her in a large chamber.

Father: This won’t hurt, but it will make you numb all over.

He pressed a button. Suddenly, she felt herself get bigger, her entire form changing. Then, armor plating from the material her father had created was placed on her body.

Suddenly, an alarm began flashing on the desk. Her father turned it off, and worked frantically to finish it.

Suddenly, a large object crashed through the roof with ten seconds on the clock. A timed nuke.

Her father couldn’t hear her. He just stared, tears streaming his eyes.

Then a bright light filled the room.

The Unknown sat straight up, sword out, impaling a Vahki that was guarding her room. Slowly, she lowered her weapon.

Unknown: (thought) What was that?

Jonn: Here we are.

Jonn: This is necessary.

They entered the Temple, and headed to the Golden Armor. Slowly, Jonn reached for the mask.

Male: Not that one.

Suddenly, they turned around to see Vakama.

Vakama: I had a feeling that someone was coming. Apparently I was right.

Vakama picked up the Chest Plate.

Vakama: This is yours.

Jonn: Why are you helping us?

Vakama handed each of them a piece of armor. To Guanka, he gave the shield. To Shycle, he gave the mask. To Bolder and Tayr, he gave a shoulder plate. To Clarrik he gave the hilt.

Vakama: Put them on.

They all put the armor in the pieces respected places. Immediately they were covered in golden armor, and given new weapons.

Jonn and Bolder were given Kolhii sticks and shields. Meanwhile, Clarrik got a Broad Sword, while Shycle and Tayr got dual blades. Even more interesting was Guanka received no weapon.

But of all that, they realized they had the same mask.

Jonn: We’re all wearing a Hau, a Mask of Shielding.

Vakama: As the Toa of the Golden Armor, you all have been given a Golden Hau. Even so, Shycle’s is the strongest, as it is the original.

Jonn looked at his staff and shield.

Jonn: We must go.

Vakama: Indeed. But don’t go west. By yourself, you won’t be able to handle what’s over there. Instead, go south. We may be able to find something or someone to help us.

Angonce: What were those things?

Takanuva: They’re Rahkshi. Teridax created them to conquer the Matoran Universe, and created a yellow Rahkshi to help conquer Bara Magna, before they were destroyed the Spherus Magna was restored.

Angonce: I remember you Dark Hunters telling me about those.

Dark Hunter: Indeed. Though, as Takanuva said, those were a new species. They’ve never been patterned before.

Ignika: Makes me wonder what else they have under their sleeves.

Ignika looked up into the sky.

Ignika: It’s getting dark. We should go to sleep.

Takanuva: As you wish. Wake me up at midnight to replace you.

Everyone except Angonce laid out a blanket on the ground, and went to sleep. But Angonce stared up at the starry night sky.

His eyes caught sight of unusual lights in the sky. Around twenty pin-point lights were floating in the sky, and were… moving.

Suddenly, everything went white. He couldn’t see his companions, or anything for that matter. Except a figure walking right towards him.

Angonce stared at the figure for a few seconds. Then recognition dawned on him.

Galtok walked up to Angonce and placed his hand on Angonce’s shoulder.

Angonce: Those red lights… those are your space crafts.

Angonce: What about the rest.

Galtok: They’re on the way. Right now, it’s only the council.

Galtok: They’re curious about what’s going on here. We detected a couple objects flying from Aqua Magna a few thousand years ago, once the light reached us three thousand light years away. Then, as we were coming, we detected another object come in a few weeks ago.

Angonce: The first object was the Mask of Life, bearing the mind of Mata Nui.

Galtok: What was Mata Nui doing outside of his body?

Angonce: Apparently the Makuta, a people he created to assist the Toa in protecting the Matoran and Rahi, betrayed him. After sometime, the Makuta were able to draw Mata Nui out, and their leader, Teridax in.

Galtok: So he trapped Mata Nui’s mind in the Ignika, and sent them away.

Angonce: Yes. However, the Ignika gave Mata Nui a new body, wearing the mask. After rebuilding our prototype, and battling Teridax, who was the second object you saw, Mata Nui restored Spherus Magna.

Galtok: So our backup plan worked, in a way. And your recent arrival?

Angonce: An Orbalan, here for revenge.

Galtok: We sent probes to Orbala while we were out in space.

Galtok: The entire planet was in hospitable. Nuclear radiation has made the planet beyond repair. No survivors.

They stared at each other for a time. Then Galtok stood up straight.

Galtok: The council is ready to wipe out this planet if needed.

Galtok: Hey, I’m against it as well. But they fear that if there are any dangers beyond our capabilities, General Brittok will have no other choice but to destroy it.

Angonce: So Brittok’s the general. Bet he would enjoy the destruction.

Galtok: If that’s what they’re called. Remember, you’re the only Great Being down there, so we don’t know everything.

Angonce: Guess the Emperor’s in agreement.

Galtok: Yes, but that’s no good without council approval. Right now, only ten percent of the council has signed the Evacuation Plan.

Galtok: I better go now. We’ll keep in contact. Just don’t tell anybody. Not yet.

Then the scenery returned. Angonce’s three companions were still fast asleep. As Angonce stared at them, he knew that, approved or not, he would evacuate the Alliance if necessary.

Chapter 12 is at the end of Bionicle: The Return - Toa Hagah Kualus 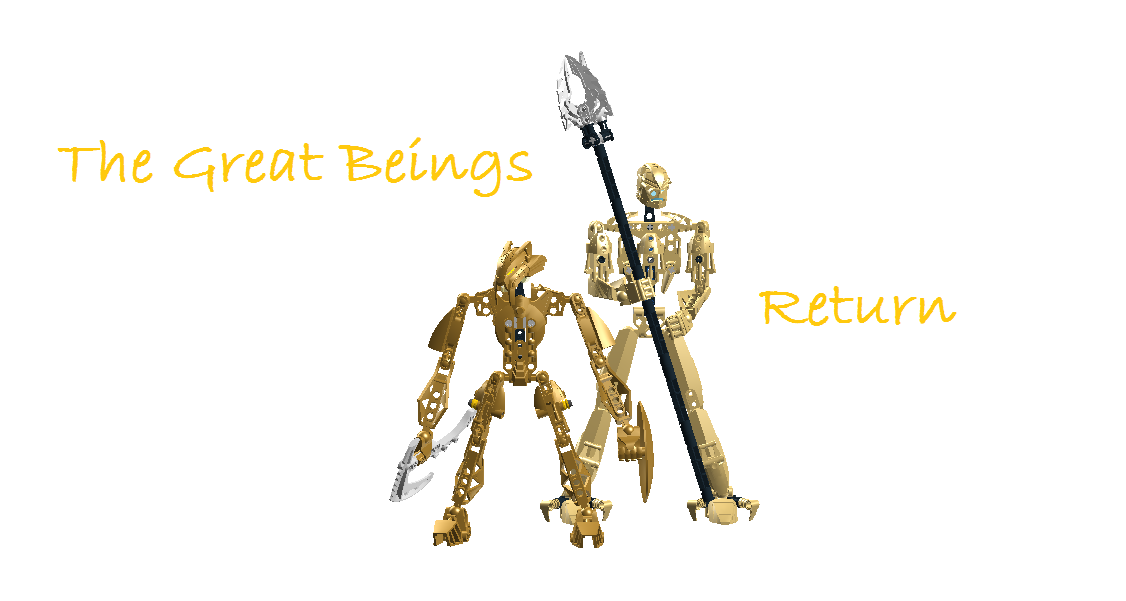