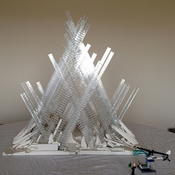 By TheExtreme
11 comments
This is a model of the iconic Fortress of Solitude, Superman's home away from home, where he often travelled for solace, advice, and has even used as a headquarters. Though the Fortress has seen several iterations throughout the decades, this one is based upon the ice/snow/crystal one in the Arctic, as portrayed in many of the comics and also in the movies "Superman" (1978), "Superman II" (1980), and "Superman Returns" (2006).

I have been building with LEGO bricks since the age of four, and over 30 years later I am an engineer by trade and still enjoy building new creations. Needless to say, this hobby has me at my local LEGO store quite a bit. I was actually inspired to crate the Fortress at the pick-a-brick wall. I saw the clear 1x2 bricks, stacked several on top of each other... and the idea immediately came to me, memories of the moves I loved so much as a kid flooding my mind. It just seemed so right! There have been many LEGO sets featuring Superman, but none featuring the Fortress of Solitude. And there are few structures as uniquely beautiful and widely recognized. Though I had never undertaken a project like this until now, it was something I was eager to share once it was completed.

I also drew inspiration from the recently released LEGO Ewok village (set 10236). LEGO did an amazing job on that particular set, because they came up with something that is aesthetically appealing and recognizable, yet has play value. I aimed to do much the same thing with the Fortress. I hoped to create something that was visually stunning and did the Fortress and the Superman franchise justice, yet had enough features and functions that encouraged play & imagination. 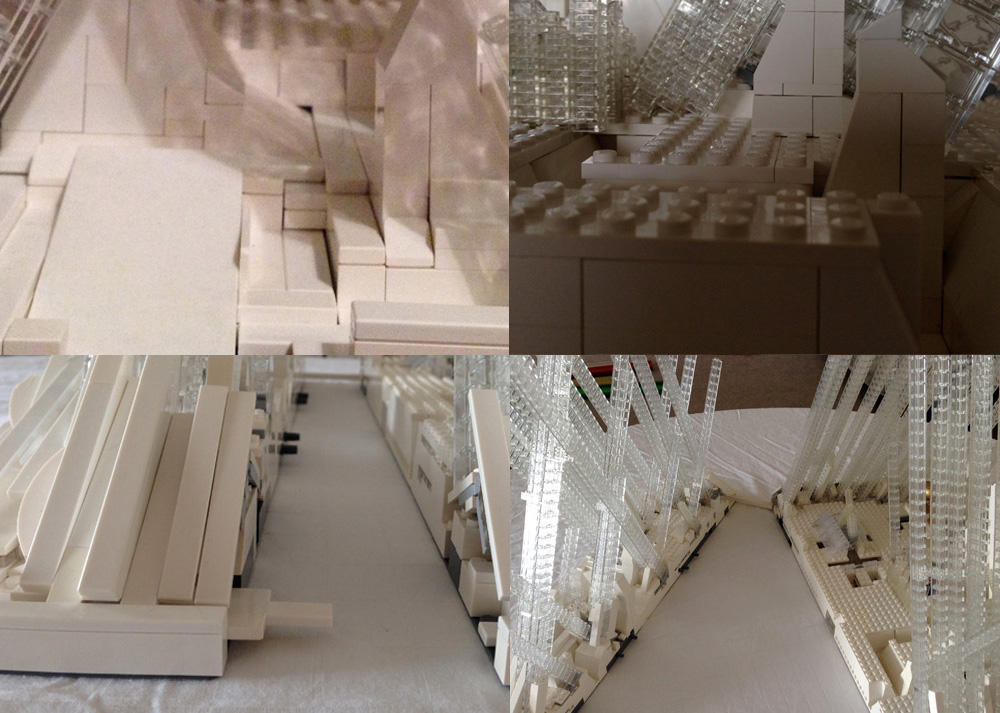 Stylistically, the Fortress is intended to be recognizable to anyone who has seen the Donner-Singer directed movies ("Superman", "Superman II", and "Superman Returns").

The Fortress makes heavy use of 1x2 transparent clear bricks. I thought of using 1x2x5 (high) bricks, but aside from the availability of that part in sufficient quantities, I avoided them for two main reasons: 1) the use of 1x2 bricks gives more of a semi-transparent effect, which seemed to better capture the look of the Fortress - especially as it appeared in the movies, and 2) the use of 1x2 bricks provides for greater building possibilities.

I attempted to use a lot of white tiles, too. These pieces create the smoothness of the massive beams on the sides of the Fortress, the breaking through the ice of the crystals, as well as the irregularity of the terrain at the entrance structure. White sloped pieces helped create the illusion of a crevasse in the floor of the Fortress.

From the very start, I wanted the Fortress to be able to be come apart in order to get at the inside. This allowed for the best appearance when the Fortress is closed, yet allows for lots of features inside to be easily accessed. The sections of the Fortress are held together using the Lego snap system. Yes, this system dates back to the mid-eighties, but proved a strong yet easy-to-work with solution. 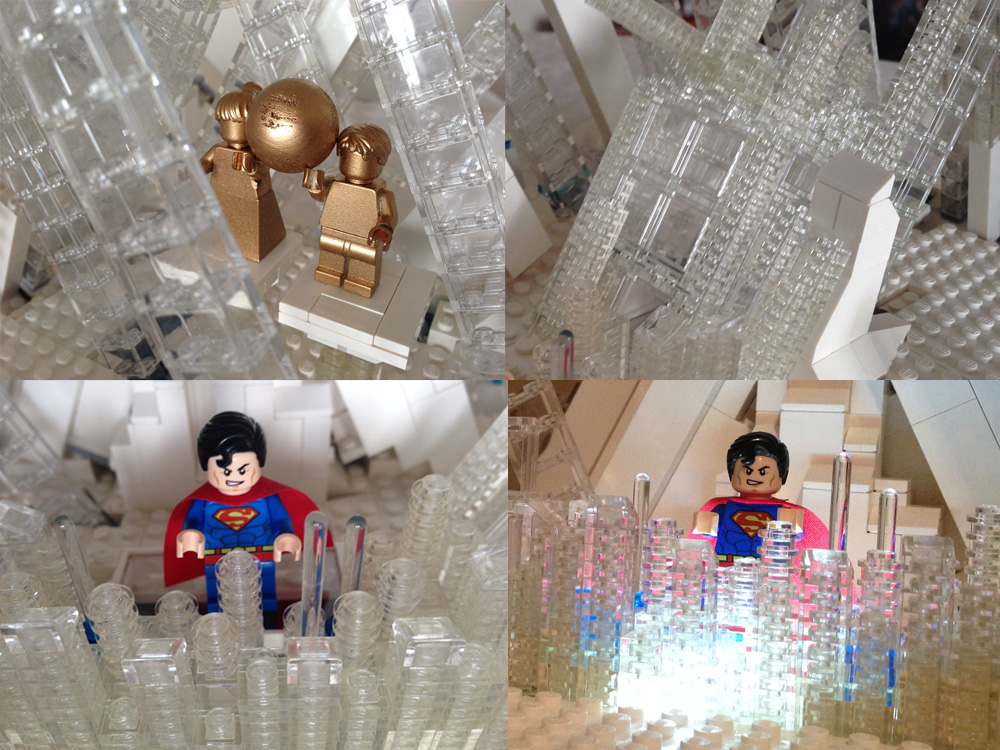 Inside the Fortress are lots of goodies:

First, the statues of Superman's parents, Jor-El and Lara, holding up the globe of Krypton. The statues are on raised platforms toward the back of the Fortress. This is a feature of the Fortress not present in the movies, but only in the comics. I opted to include it anyway because it seemed so fitting with the Man of Steel's character - the Fortress is a monument not only to a long perished, powerful civilization, but in Superman's eyes it is also a reminder of who he is, and the very reason he is alive today. The statues are a reminder of Supe's humbleness, and his striving to uphold the example his parents set. Plus, they just plain look cool.

And okay, I confess: the globe here is actually not LEGO, but a painted wood piece. However, to get the right look I cheated on this one element, as I know the LEGO group has produced spheres.

Second, the molecule chamber from "Superman II". It harnesses the red rays of the Kryptonian sun and... well, if you have seen the movie, you know (and I'm guessing most of us have, but for the rare person who hasn't, I won't spoil it and will instead suggest you check it out!). The front of it comes off and a minifigure easily fits inside. I arranged for a transparent floor, and a lever at the back of the Fortress will change the floor tiles underneath from white to red. Of course, a red light brick would really work best in this instance, though.

Third, the crystal control panel. I wanted the look of something solid but clearly made of ice or crystal, just like the movies. And I quickly lost count of the number of clear 1x1 plates, 1x1 rounds, 1x1x2/3 tiles, and other related bricks it took to build this! The clear whip aerials really help add the look of the crystals as well.

Fourth, the control panel also has a clear floor and unlike the molecule chamber, I was able to light it up. A light brick would be handy here too, but in this build I used a very small LED flashlight, which can be slid under the floor of the Fortress. 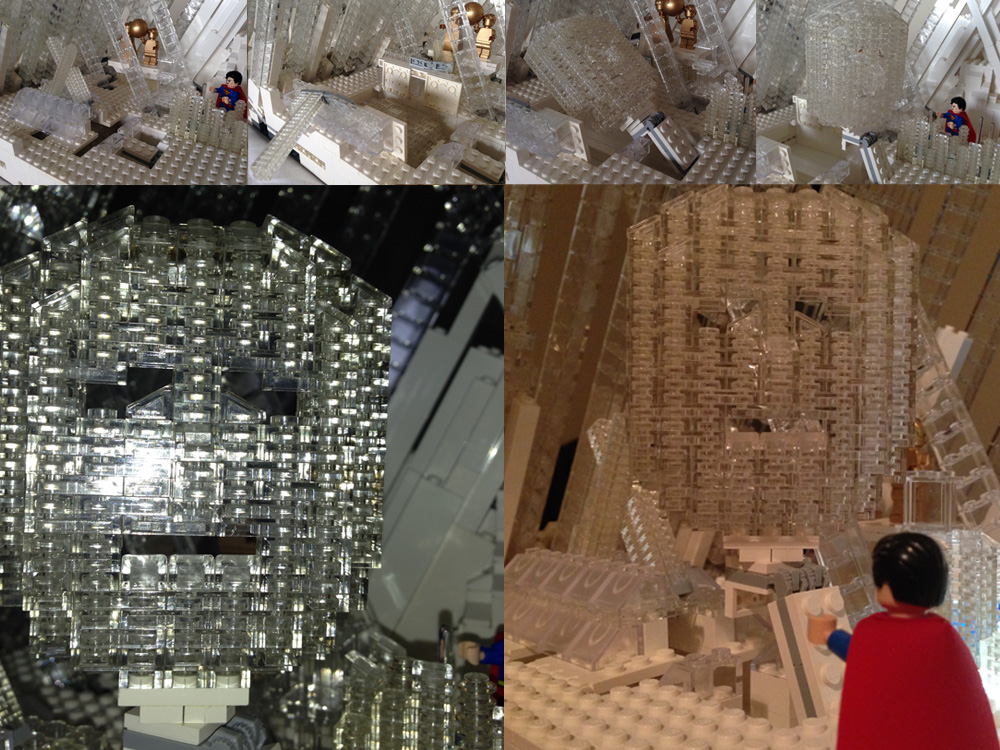 The control panel also reveals one of the great truths of Superman legend: the spirit and soul of Jor-El abide in and through the Fortress. Just like in the original 1978 film, choose the right crystal, and Jor-El will appear, ready with advice for his son. In this version of the Fortress, two otherwise ordinary floor panels open, and allow the "crystal mask" appearance of Jor-El (as seen in the movies) to rise from the floor. This mask was a real trick - and treat! - to create. It involved the extensive use of 1x1 and 2x1 clear plates, plus 1x1x2/3 clear tiles not only for the curves of the mask, but also for the right feeling and shape of the eyes: Desperate, but comforting. Sad, but wise. Dead, yet eternal. Talking to his only son... 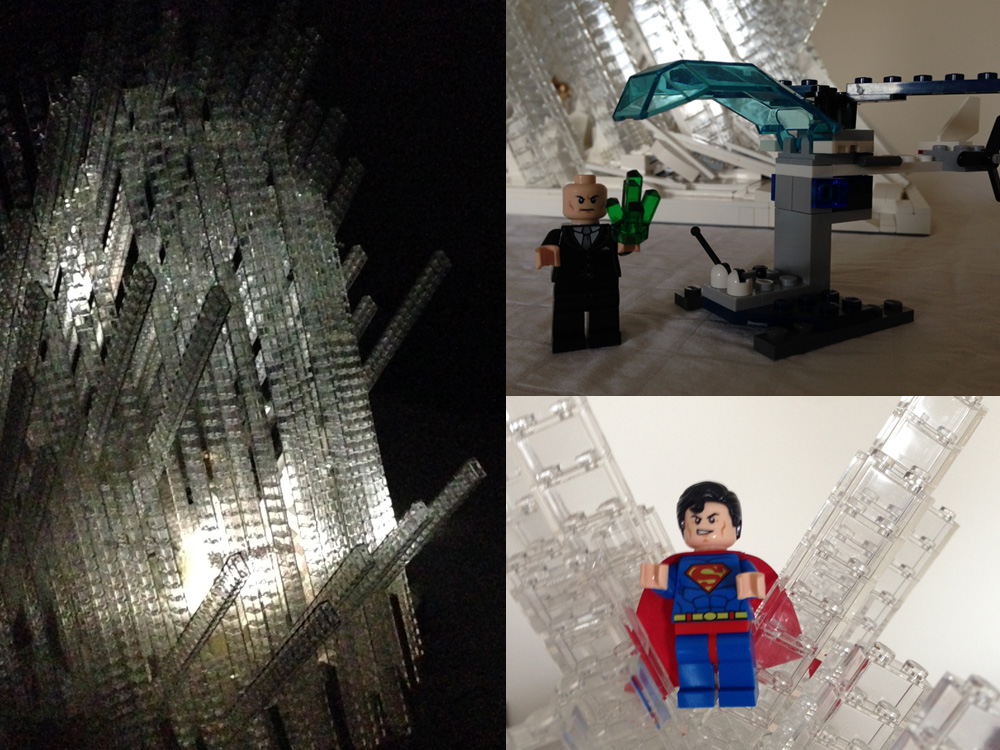 The LED flashlight that lights up the floor under the control panel actually lights up the entire Fortress, too. Turning out the lights reveals a stunning view of the Fortress of Solitude aglow from the inside, just like the movies.

I'm sure some are asking the question: what minifigs come with the Fortress? Besides Superman himself, I have to include Lex Luthor, complete with kryponite. I just have to. Lex is Supe's number one enemy, plus it gives us an excuse to add a vehicle to the set too, greatly enhancing the playability. In "Superman II", Lex (along with Miss Tessmacher) travelled by snowmobile; in "Superman Returns" he and several others arrive at the Fortress by helicopter. I chose the later of these two possibilities because it seemed far more plausible, though the helicopter pictured here is simpler than what I am envisioning. I would think one that can carry four pssengers or so would be best (and probably styled after the chopper seen in "Superman Returns"). With the helicopter and Lex, one might well include a female minifigure of Miss Tessmacher, or Kitty, or whoever the gal is he happens to bring with him. I've also thought that the Kryptonian criminals General Zod, Ursa, and Non would be fantastic to have as well. Yet another possibility is a Lois Lane minifigure, who Superman has brought to the Fortress to share his secret. Inclusion of all the previously mentioned minifigures - my personal choice - allows the story of "Superman II" to be played out. But once Superman and Lex are part of the set, it's hard to go wrong with any others that would be included.

I hope you enjoyed checking out the Fortress of Solitude as much as I did building it. I'd be humbled and grateful for your support... thanks for checking out this entry!

UPDATE: More photos of the Fortress are online at http://www.flickr.com/photos/jeffcallicott/