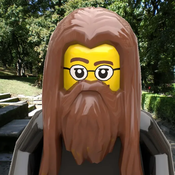 By symbioza
37 comments
Polish your sword, dust off your spell book, pack your sandwiches and venture on! Plenty are the secrets hidden within this dungeon, awaiting for an adventurer like you. But beware, for there is an ancient evil lurking there, will you risk awakening it? ...
1. What is it?
It's a model of a dungeon, reminiscent of those from fantasy RPG games. It's both a display piece (because of its level of detail), and a playset. It has five main play features.
First of all, there are two working, brick-built traps. Both are activated by stepping on certain floor tiles.
(1) If you step on a wrong tile near the entrance, a cage will fall upon you*.
(2) If you step on a wrong tile near the treasure chest, a pillar will fall on you**.
Second off all, there are two hidden compartments for your adventurers to discover.
(3) In the corner, there is a weathered wall. Part of the wall slides to the side, revealing a secret chamber behind it. There is a hidden flaming sword there. (Also, there is another way for you, human, to access this chamber, that is better suited for human fingers.)
(4) There is a hidden trapdoor on the floor, hiding a golden goblet and a magical potion.
(5) Finally, the model comes equipped with a party of four adventurers (a male elf hunter, a male human sorcerer, a female halfling rogue, and a female human paladin) and a giant spider for an exciting boss fight.
2. Why I built it?
I’m a huge fan of role-playing games, especially those set in fantasy realms full of magic, mythical creatures, and adventures. I also teach ethics in primary school, and as a teacher, I want my pupils to develop their imagination, skills of creative thinking and internalise certain moral values. I think it’s curious to note that RPG games accomplish these very goals: they make us conceive imaginary scenarios, solve puzzles and problems we encounter, and take the role of a heroic person. Of course, playing with LEGO also develops creativity and imagination. That’s why I believe a LEGO RPG set is a perfect combination.
I wholeheartedly believe there is something universally humane about RPG games: the longing to explore distant and exotic places (life as a journey), to possess powers to control the environment (transcending our humanity), and to fight bravely the evil (being a hero). And I think a dungeon best represents the essence of role-playing games and all that I value about them. In other words, I mean this dungeon to represent all that is RPG with its ample potential, both narrative (to conceive imaginary scenarios), and moral (to internalise values).
3. Why you might like it?
I’ve seen many custom models of dungeons, castles and other medieval- or fantasy-related builds. They are very impressive, but clearly designed for adult LEGO fans. My ambition was to design a model that could offer something of value for both children and adults. I wanted the model to have a high level of detail with advanced techniques for a fulfilling building experience, but to have play features to interact with as well. (It has to be said that the play features are well integrated, in a way that doesn’t compromise the visual presence of the model.) That, I believe, is the best way to make sure the model will truly engage the imagination and creative thinking I so value.
What is more, the way this model is conceived can result in children and their parents having a quality time together with it. Children would want to have this set to play with it and enact different scenarios, making use of its play features. But they might want to ask their parents to help them with some more difficult parts of the build (those using advanced building techniques). In result, the parents will have an interesting, non-trivial building experience, and children will learn something from seeing these advanced techniques being used (thus providing an incentive to develop their creative thinking).
To sum it all up, this model is not dedicated to RPG games fans only. They will recognise and appreciate my passion for RPG games, to be sure, but I think role-playing games represent certain universal values, and thus people of all ages, all ethnic, cultural, and religious backgrounds can take away something of value from it.
If this model awakens in you the longing for adventure and knighthood, whether you’re a child or an adult, I will be proud and my mission will be accomplished.
This build is not a part of any existing IP.
How the traps work:
* The trap near the entrance:
The trap uses rubber band, a technic axle and holes, plates with rails and bricks with grooves.
The mechanism of the trap is based on an assembly that is attached to the base of the dungeon by rails and grooves. The assembly has a rubber band attached to it from one side. The rubber band wants to pull the assembly, but if the floor tile is in its initial position, it blocks the assembly from moving. However, if you push the floor tile, the assembly is pulled by the rubber band, and with itself, it moves a technic beam that holds the cage above the door. When the beam moves, it slides away from the cage, and so the cage falls down.
What is more, I added a good access point to the mechanism from the backside, for you to be able to reset the trap easily.
** The trap near the treasure chest:
The trap uses technic beam under the floor: stepping on a tile moves the technic beam, and in turn that pushes the pillar to fall over.