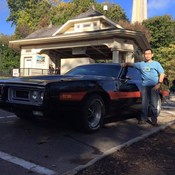 In this Lego Ideas 1969 Dodge Charger Daytona, I put all the effort to build an exceptional design of this car. I created this design to the perfection that it will look same as the real 1969 Dodge Charger Daytona. Open the hood, and you will find big power engine, pop the headlight as it was the original design, open the door to reveal the panel instrument and interior detail, and don’t forget to put all your racing gears in the trunk.

The point of Interest:

Support this iconic American muscle car in addition to your collectibles, so that the Lego Board can review this idea and finally we can buy this product from Lego Store to celebrate 50 Years anniversary of Dodge Charger Daytona in 2019.