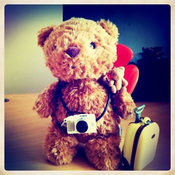 By aleehc
7 comments
The Black Getter is a modified Getter-1 unit that first appeared in the OVA series Getter Robo Armageddon, and later appearing in video games starting with Getter Robo Daikessen and appearing in many of the Super Robot Wars franchise games.
Although possessing the same overall body shape of a Getter-1 Unit, the Black Getter had several differences besides the aforementioned new black color. It displayed a redesigned knee armor, lacked the antennae usually seen under the ears, came equipped with a mouth guard acting as the hatch to the cockpit, and possessed pupils in its eyes, similar to those seen on Shin Getter Robo.