Hurray for 10K! and Thanks for all the Support!

Hurray for 10000 amazing supporters!  The Clockwork Aquarium has been a triumphantly fun project and its so wonderful to see it reach the support needed to go to review.  Thank you so much Lego Ideas community for all the support! Since shortly or immediatly after hitting 10K, projects get locked, I'd like to indicate that if you are looking for continued updates on this project, such as Instructions or Stud.io files, please head over to my personal site: http://thefarquar.com.  I'll post the instructions once I get them done, and especially if Lego doesn't pick this project up.  And of course check out and support my other projects, Adventure Baby Squad is really cool and has an awesome stop motion video.

The Clockwork Aquarium Story So Far:
The idea of doing a Lego Aquarium came from my wife, who suggested it while we were at the aquarium with the kids.  It happened to be the aquarium accross the mall hall from the Lego Discovery Center!  I thought about it for a while and told her, if I make an aquarium out of Lego, its going to have to move.  I tormented over making the internal mechanism for a while and had tried a dozen different approaches including using treads, chains, even methods that would make the fish go around and up and down.  But many of the methods were clunky, too big, or fell appart too easily.  I spent a good bit trying to make the aquarium look polished and trying to figure out what size it should be. When done, I actually posted it to Ideas mostly out of whimzy, I didn't think it was going to go all the way to 10K, what an exciting surprise!

Themes: In part to demonstrate the versitility of the Aquarium, I've been making numerous secondary themes including:
The Original Theme, Little Mermaid in her Grotto, The Kraken vs an old Ship, SpongeBob going Jellyfish Fishing, The Captain's Quarters of a Sunken Pirate Ship, A colorful Coral Reef, Finding Nemo set inside the Dentist's Tank, and even an Octopus's Garden with a little Yellow Submarine.

Past Updates: I've continued to tinker with the Clockwork Aquarium since posting it.  From making the doors a little cleaner, to adding a ratchet, testing different fish pole methods, and finally making it so the backgrounds could be swapped out super easy!  I've also tested out motorizing it and lighting it with a cell phone and Lego LED lights.  So there are quite a few options for Lego Fans that might want to tinker with it.

My Hopes: I'm hoping that if selected, Lego will include the parts for two themes in the box.  And I think it would be really awesome if they produced some promotional PolyBags that include the parts for a 3rd theme that could be handed out on its launch.  I also hope that Lego is open to making the colorful printed fish, printed minifig head with Shrimp on it, and making the little 1x1 plates with horizontal and vertical clips in Clear.  One can dream right?

Once again, Thank you so much for all the support given to the Clockwork Aquarium by the Lego Ideas community!

Videos for all the secondary themes as of now:

Loaded with lots of Coral, Plants, Fish and even a little tunnel the fish can swim through:

This is an actual functional design update for the Clockwork Aquarium.  In this update, I've made it it much easier to swap out the background of the aquarium and trade it for another.  This would allow the Lego fan to premake alternate backgrounds and then swap them in.

Check it out in this video: 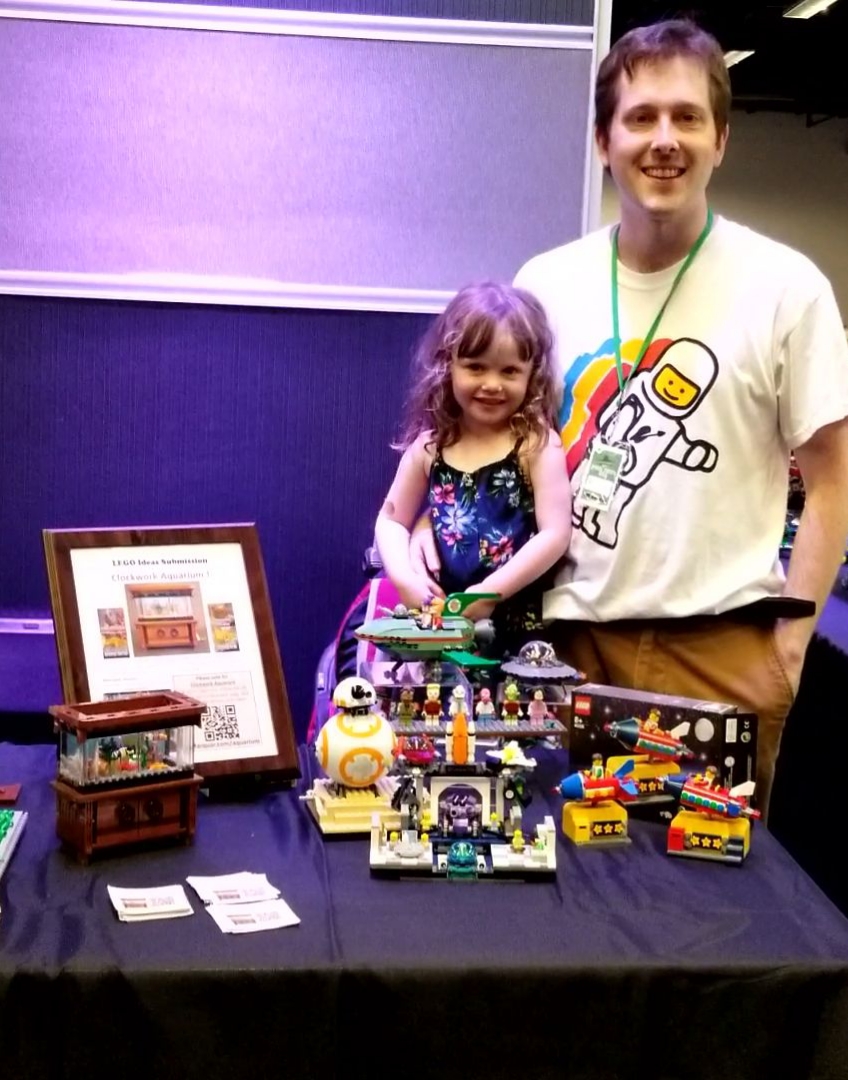 Hurray, I was invited to speak at Brick Fiesta in Austin this year.  I had a little space too to display my Lego Ideas to other Lego fans!

I brought my original Rocket Ride and the official Lego version, the Clockwork Aquarium, Rolling BB-8, Adventure Baby Squad, and my Futurama figures and ships!

This comically tiny EPIC battle between the mighty Kraken and an unfortunate vessel comes to life by turning the crank. This is meant to serve as inspiration for what a Lego fan could do with the Clockwork Aquarium.  Please support the project so someday soon you too can "Release the Kraken"!

I hope you like this theme and please do support the Clockework Aquarium!

Thanks for Stopping by!

Yarrrrrrr!  Explore inside a Sunken Pirate ship in this supplemental theme for the Clockwork Aquarium project!

This theme is set inside the captain's quarters of a great pirate ship that has sunken to the blimey deep.  There is a treasure box that opens and shuts, 3 fish that swim about, a skeleton (perhaps the captain himself) trying to take a sip from a bottle, a globe that spins, a steering wheel that rotates, and other pirate ship cabin decorations.

See the doomed pirate in action:

Ratcheting the Crank and Part Count

One small detail about the Clockwork Aquarium is that it is made mainly to have the fish swim fowards.  Up untilunow, the use could turn the crank both ways  I the though.  When in reverse, the fish will go backwards a short bit and then jam up normally.  So I have updated the Aquarium crank to have a ratcheting mechanism which only allows cranking in the one proper direction.  It works quite smoothly and effectively. 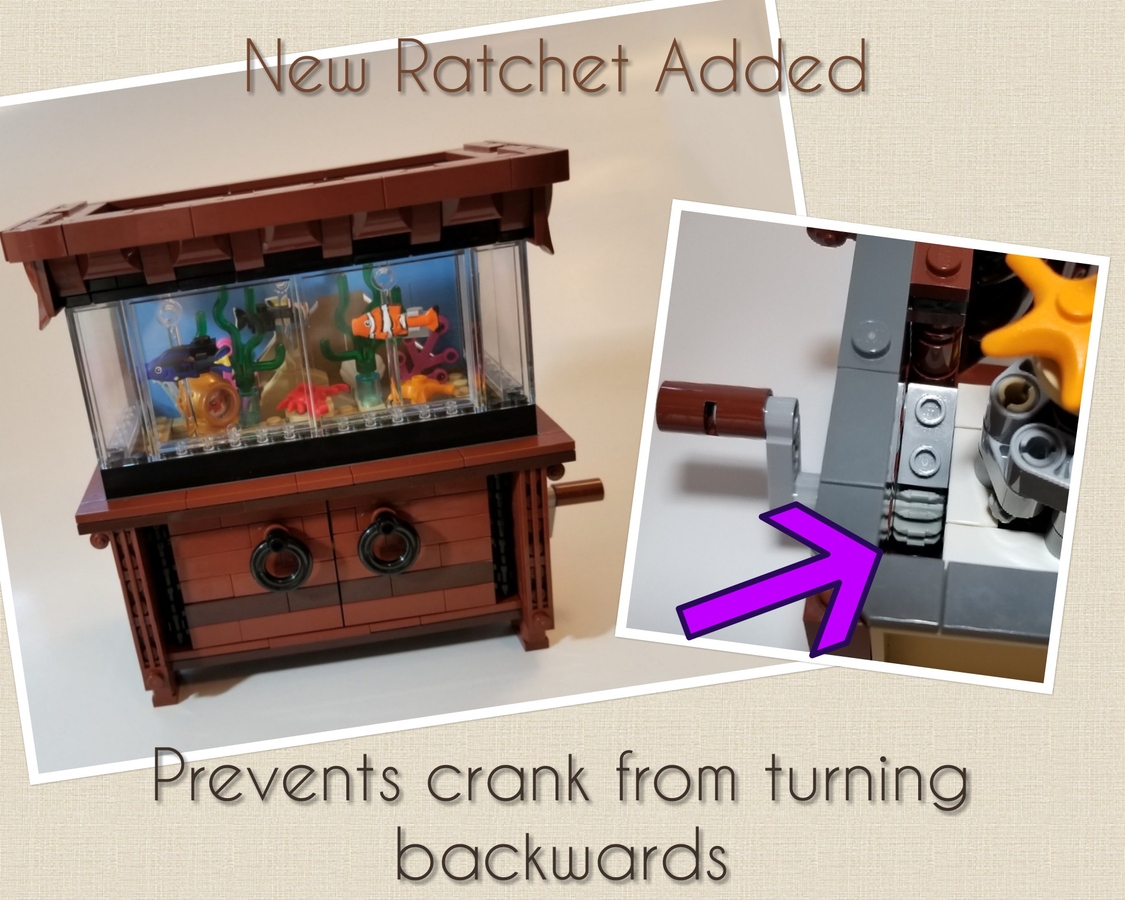 See it in action:

As some additional information, I also counted every part in the Clockwork Aquarium to find out the current part count with the original theme:

Peak into Ariel's grotto where she stores her amazing sunken treasures in this fun fan theme for the Clockwork Aquarium!

See Ariel dance in the middle, Flounder and Sebastian Swim around her, and her glorious trinkets in this video.  Watch out, Ursula's Tentacles can be quite mezmorizing as they all flail about outside the Aquarium!

The Background and Trickets included: Dignlehoppers (forks), magnifying glass, model of a ship, helmet, sextant, bottles, a globe, and her prize statue of dreamboat Eric! 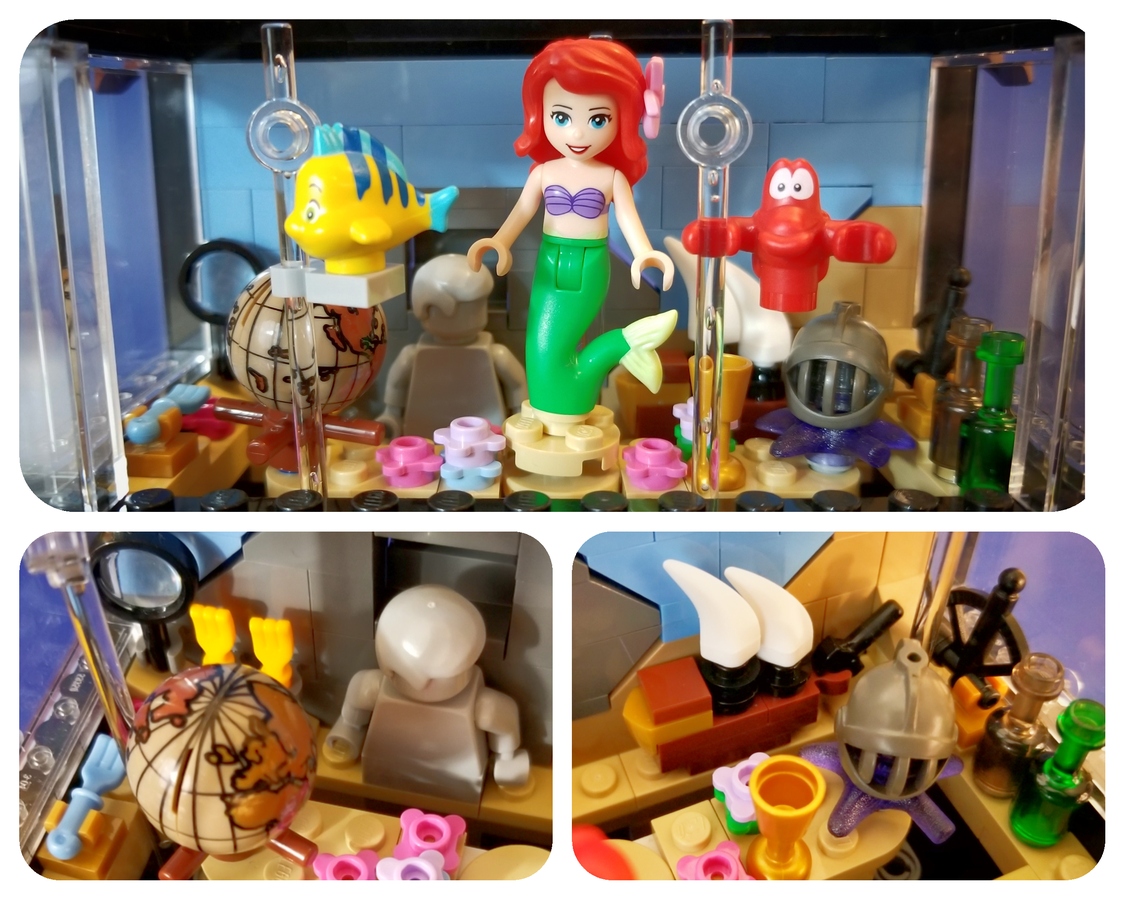 This "fan" theme was made to continue the fun of the Clockwork Aquarium and not replace the primary project's theme.

First off: Hurray for getting Staff Pick!  How delightfully wonderful and thanks for all the new supporters that showed up these last few days!  Thanks Lego Ideas Staff!

I tested out a new design for the front doors which covers up the hinge pieces' 1x2 studs.  The picture also shows the doors without the front "latch" which makes it look cleaner but I may bring the latch back because I still like it. 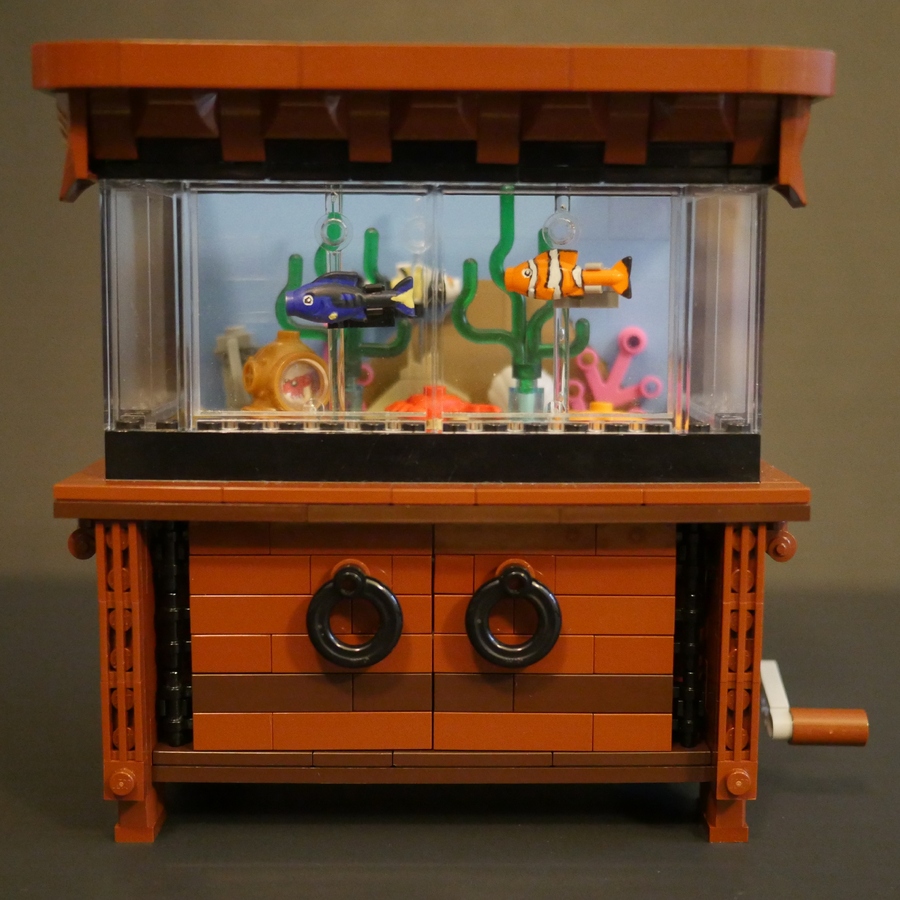 Thanks everyone for your support!  I still have high hopes for this long shot!