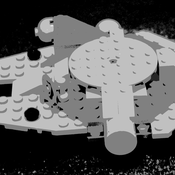 This LEGO set represents  the amazing battle of Hoth in Star Wars V :The Empires Strikes Back. This is a microscale diorama representing the epic  battle and includes two imperial AT-AT walkers, five  rebel snow speeders and the legendary  Millenium Falcon.

This LEGO set contains five microscale snow speeders that are attacking the AT-AT walkers. It also contains two microscale AT-AT walker and the microscale of the  Millenium Falcon. The LEGO have a little part of the rebels base that is inside of the mountain and  can be accessed using a removable lid concealed within the scenery. The Millenium Falcon is parked inside the base it also has a part of  the amazing Planet Hoth using white and dark gray bricks. The diorama is built on a standard 40 x 40 cm Lego panel.

I think  there is a great opportunity to develop dioramas as they are both fun to build and convenient because of there size. It could come with  five to seven bags containing the bricks arranged by groups such as frozen ground, rebel base, AT-AT's...  I imagine about a hundred pages booklet for the instructions.