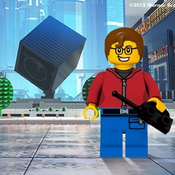 This game is a fantastic retelling of the classic snakes and ladders. Made entirely with Lego pieces, The Lego Snakes And Ladders is made with a total of 1702 pieces on a base of 48x48.

The scenery where the players will have to battle it is a scale model of Lego City, where you will be able to distinguish the most important city buildings. There are in fact the police station, the fire station, the port, the airport, the town hall and many others.

Goal of the game

The objective of the game is get to the end of the numbered boxes before the others players. The displacements are carried out with the help of a nut. Players will have to arrive first to the city hall, but paying attention to the pitfalls that they will encounter along the way. The boxes with a red dot in the center presents possible pitfalls or possible aid for the player that goes above.

The game board consists of a path that is formed by 65 numbered slots (including the arrival box). Each player is marked by a different marker. For movements of each player has available a dice.

Usually starts the game the youngest player. It will then proceed clockwise. The player start throwing the dice and moving their pawn in a number of spaces equal to the number out with the die.

When one of the players happens on a box marked with a red central point takes the manual and observes the possible help or obstacle.

These are the aids and obstacles:

I really hope you like my creation of the LEGO Snakes And Ladders.

Discover my other projects.