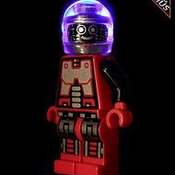 May I introduce to you the Imperial Assault Gunboat from The Brick Shipyard, a collaborative effort created by my brother Connor and I with assistance on the main photographic effects by Kristin Jordan.  This is a joint venture that we envisioned and started in 2003, being inspired by Lego Star Wars which was in its infancy and really catching on.  So we endeavored to design our own ships of which a few were sold on eBay where we jump started a new market for custom Lego designs such as the AT-AT, the Lambda shuttle, and even the Millennium Falcon.   Here we are today, grown up with real life responsibilities, yet still designing, building, and working together on fun projects.  With this submission we are hoping to take things to the next level...  now about the ship.

This is a handsome, 5 wing craft that is also known as the "Star Wing" and the Xg-1.  This craft was developed by Cygnus Spaceworks according to Star Wars sources.  My interpretation of the Assault Gunboat you see before you is specially made to offer;

III. A recognizable to scale form

I believe I achieved all of my goals while keeping in the spirit of a fun, uncomplicated build.  Taking advantage of Lego's new canopy, I was able to achieve the cockpit sleekness befitting such a craft that was known to hyperspace into battle like a predator on the hunt for rebel ships.  Like the Lambda shuttle (of which this craft is a brother to because of its Cygnus heritage), getting the cockpit to have the precise angles was very key.  I went through many renditions over the summer of 2015 before settling on the final cockpit look.  It is big enough to seat one Imperial pilot comfortably with his navigation controls.  There is also a hinged panel at the very nose that can house a small blaster or a few tools.  The rest of the ship flowed from there with the main body using some technic elements for maximum stability.

The main body had to naturally be the strongest part of the ship because it houses the retractable landing gear, the hinges for the lateral wings on which the fixed dorsal wings flank, and the internal connectors to support the central wing.  Adapting Lego's clever technic wing design I was able to build a very sturdy central wing which is strong enough for a hand to pick up without risking destruction.  On either side of the main body are two panels which can open 90 degrees to reveal a small storage box that can slide out.  The contents may be a data pad or small blaster.  Behind the storage container is detailing representing the hyperdrive.  On the front, flanking the cockpit are the missile tubes and at the rear of the main body are two engine nacelles with the distinctive blue afterburners.

Finally, the crew consists of a flight deck officer, an Imperial storm trooper, a trustworthy mechanic, and the aforementioned pilot.

We will do our best to answer all questions/comments and to address constructive criticism.  Thank you for viewing and please consider supporting!