The House That Rings On Main Street 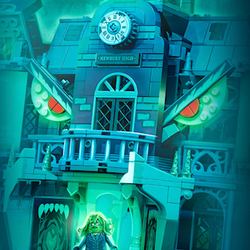 This set is based off of an original series, The Chilling World of Nightmares. There are three mini-figures in the set, Jack, Max, and the House Keeper. This is a replica of the house in the show. in the show the house rings and disturbs many people in the town. Two boys go and see the house and try to figure out what's making the noise. this is in the format of the LEGO Hidden side- Newbury Haunted high School set. I built this because I thought that a replica of the house in the show would be a awesome idea for a lego set. This would make a great LEGO set because the house itself is haunted and LEGO fans would enjoy putting the mini-figures in crazy situations, battles, etc.
3