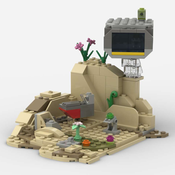 By Jayhawk226
32 comments
This house is an idea I had a while ago, I built it, and I showed some friends, they liked it and told me to put it on here.
I enjoy building houses, but most of them (Both official sets and Idea sets) do not have a lot of detailed surroundings. That is why I built this Lake House. Not only because I had never done this type of ground before, and the idea popped into my head, but I wanted the builder to be able to be able to know what was immediately around the build. I think this would make a good Lego set because of the house's architecture and because the colors go together well. This is a giant set, and (I think) would look good pretty much wherever you would keep it.
Lush green pieces are in abundance in this set, and overall, this set has a lot of detail in it (There's even a spider underneath the house!), and would be exiting for someone build. Please support this, and my other projects!
[NOTE: Unfortunately, I used a green screen for the first photo, and, as it is mostly green, it may be a bit 'muddy'. :0)]