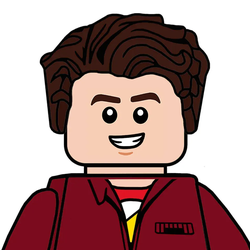 This LEGO set proposal is based on the popular American sitcom Seinfeld created by Larry David and Jerry Seinfeld. The set represents stand up comedian Jerry Seinfeld's apartment in New York, which is the key location of the show. The set includes the four main characters from the show, Jerry Seinfeld, George Costanza, Cosmo Kramer, and Elaine Benes. The apartment is complete with Kitchen, Living Area, Hallway with hanging like that leads to Bedroom and Bathroom. The set also includes his shelf with Superman memorabilia and other collectibles. Kramer is complete with his pretzel for the famous line, "These pretzels are making me thirsty!" The iconic scene "Say Vandelay! Say Vandelay Industries!" The door also swings open so that Kramer can make his iconic entrances. Also includes designs that capture the main characters' personas. There is also a stage area where Jerry can do his stand up comedy. This is a very important and iconic part because every episode starts with him doing a routine.