Bears of the World 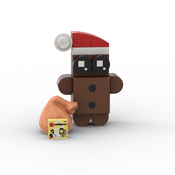 By JamosStuff
15 comments
Bears... They come in all shapes and sizes Panda Bears Brown Bears Polar Bears Koala Bears Teddy Bears.
Here are some of the amazing bears you can find around the world packed into one set
Brown Bear: The most common type of Bear... They are found in Canada, America, Russia, and around Europe. They eat Salmon mostly, but they also eat Meat, Fruit, Vegetables, their Omnivores so that means they most things.
Black Bear: Black Bears live in the Rainforests of British Columbia, and they have a subspecies called the Spirit Bear (More about them soon). They pretty much eat the same as Brown Bears so their Omnivores to!
Polar Bear: Polar Bears are the only bears that eat only meat, they live in the North Pole and their is no vegetation their. They are more dangerous than other Bears and will hunt you down if their hungry. They are endangered though, The arctic is melting and the Polar Bears have nowhere to go... However if we reduce our Carbon-Footprint they might just make it.
Panda Bear: Panda Bears only live in China and eat Bamboo and small Mammals and Insects, I guess a Panda could hurt you but their pretty slow so their not much of a threat!, They are Omnivores like Brown Bears and endangered like Polar Bears... People are cutting down Bamboo forests so the Pandas have nothing to eat and nowhere to live, the most we can do is donate to people who support Pandas.
Spirit Bear: 10% of Black Bears are born white, they are called Spirit Bears... They are rare and very special, The Native people of British Columbia believe that a God put them on Earth to remind people of the harsh times of the Ice Age. They find it easier to catch Salmon because they they blend in with the water more because their lighter in colour.
At first I made a Spirit Bear for my icon, and I liked it so much I thought I would make it into a Idea to post Online, so I made one design with four bears, then I made a second design with five bears which is this one, and I loved it!
This idea includes 5 Bears and their names on plates plus micro versions of them!
So here it is, please support and help these little guys get on shelfs!