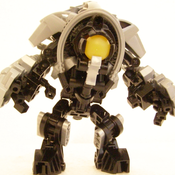 By CGermain
0 comments
This is a robot that is built around a Bionicle Midak Skyblaster. It would be pretty cool to see this become a set, as it's one of my MOC's that I'm most partial too. The overall shaping of the creation is inspired by a combination of the Big Daddies from Bioshock and the Grunts from Halo.

As far as the actual creation goes, it's very stable and only has illegal connections in the hands, which can be changed if it ever does actually become a set.

Feel free to support the project if you think it's a good idea, and let me know if you think there are any of my other MOCs that would be a better idea for a CUUSOO project instead, or something that would make this project better.