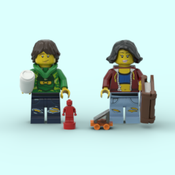 By V and C - Master Builders
10 comments
Lloyd: Hi guys! It's me, Lloyd and we're back with another amazing vehicle to help us save the city of Ninjago from anything - snakes, stone warriors, robots, ghosts, oni, pirates and much more. Our helpful designers Zane and Nya will tell you more about this. Anyone?
Nya: Hello everyone! We'll be showing you our new Land Bounty 2.0. The original version was made by P.I.X.A.L, but now Zane and I transformed it to a better one. Let's start from the roof. This bounty has a ladder and staircase on either side to access the roof. On the roof we have two training dummies, a fighting arena and two climbing frames.
Kai: Hey sis, have you forgot to tell them about that enormous canon you've made?
Nya: Yes, right, There's also a six-stud-shooter canon, which is right next to the climbing frames.
Zane: Hello! I will tell you about the interior. Our bounty has a large windscreen, a few consoles, six seats in the front and a couch at the back.
Cole: Sorry to interrupt but have you got a place to store my ultra-delicious ganache frosting chocolate cake? I'd starve to death without it!
Zane: Yes, Cole don't worry. I've also included a small mini-fridge.
Jay: Hey guys! I just want to say that us ninja need to rest. Did you include a TV or anything of the sort?
Zane: I didn't put a TV but instead made a small arcade console.
Jay: Yes, I can stay video-gaming until midnight!
Sensei Wu: No Jay, you have some training to catch up first.
Jay: Ah, man!
Sensei Wu: Have you also made a weapon rack with the golden weapons at the back of the bounty?
Kai: Correct. I've forged the golden weapons back as they are the most powerful weapons we've ever had.
Lloyd: And so here you have it! We ninja never quit into bringing the impossible possible. Do not give up on any of your submissions. Please support this amazing submission as it's one of a kind - built by your favourite ninja! We do really appreciate.
All: Ninja-Go!!!!