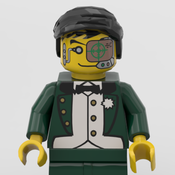 Presenting to you my little starfighter. A small space craft with some weaponary attached, some storage room in the back for snacks and a place for a license plate on the front! Wouldn't want to get caught by the space police not having one!
The inspiration for this craft came from a video of 10 great and massive LEGO space ship MOCs. Neither do I have the experience in using digital tools nor do I have the parts for complex creations so I knew I couldn't go big, so I tried something small.
And it was only supposed to be a try. But it turned out better than I expected! So good infact that I seriously considered buying the parts for it. Unfortunally some parts aren't available in the color needed or in one that could be used as a substitute.
The reasons I thought of that would make this a great set are the following:
- space is a very popular theme. Star Wars for example is a strong franchise but it doesn't stop there regarding sci-fi. Adding non-licensed spacecraft to the LEGO cataloque would be a great addition to the sci-fi playverse aswell as supplying LEGO fans with more suitable parts to build even more great space ships!
- Small single-vehicle sets are more often than not a go-to products for gifts. Looking at the part value this would fit well in the 15€ range. A niche not exactly filled for sci-fi.
- Regarding the design itself I think it has some charme to it. A sleek design that combines round and edgy design elements, play features like a storage bay and fully retractable landing gear.