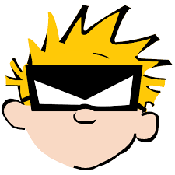 By h82blat
1 comment
Strider Glider and Boss Set Intro:
Strider Hiryu is an iconic video game character from Capcom. The original Strider was released in arcades in the year 1989. The character’s popularity grew and spawned many sequels, with a new game titled Strider Hiryu (or Strider Reboot) releasing in February 2014. Strider also has appeared in the Marvel vs. Capcom fighting game series and is a fan-favorite character.
My inspirational source material consisted of the original Strider 1 (1989), Strider 2 (1999), and Strider Hiryu (2014).

*See Flickr page below for source material artwork along with additional photos of the Lego Strider design.

Thanks for your support 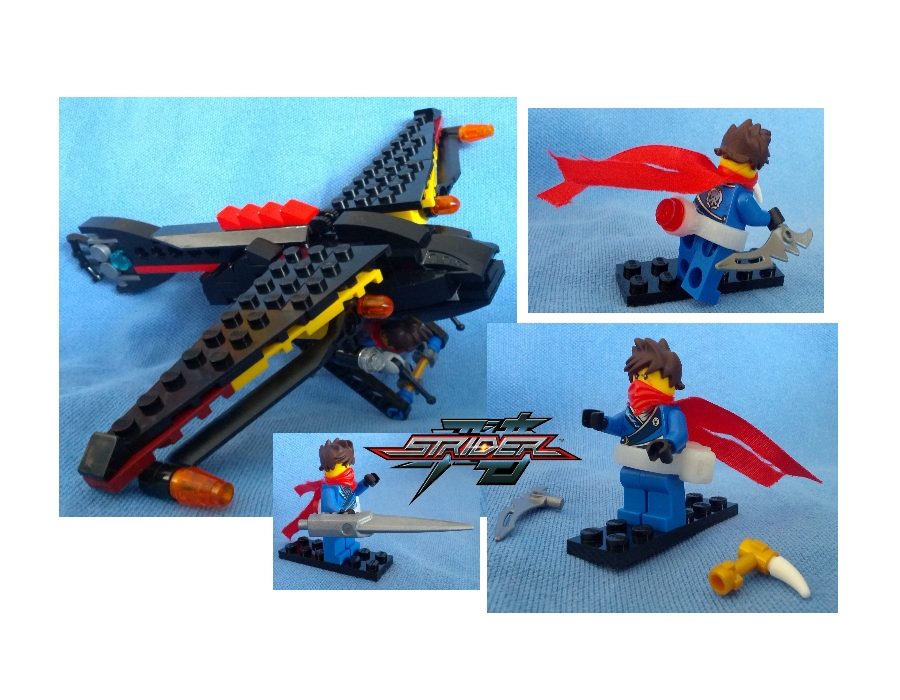 Strider Glider is the vehicle in the set. It takes some cues from the original Strider version and mixes them with the most recent Strider Hiryu incarnation. I would like to see the glider be a bit slimmer, as it seems a bit bulky using my current brick assortment. I do like the length in scale with the mini-figure, and feel it is a good size, but could use a little weight loss.

Strider mini-figure with scarf, cypher weapon and climbing hook. (The belt is optional and could easily be part of the mini-figure artwork. I made this representation using a screw-down tie-wrap). Strider is the main hero in this set. He is a highly trained special-ops ninja who battles for the good of all. Standard color: blue shirt and pants with red wrap, brown hair, red scarf, silver wide belt. 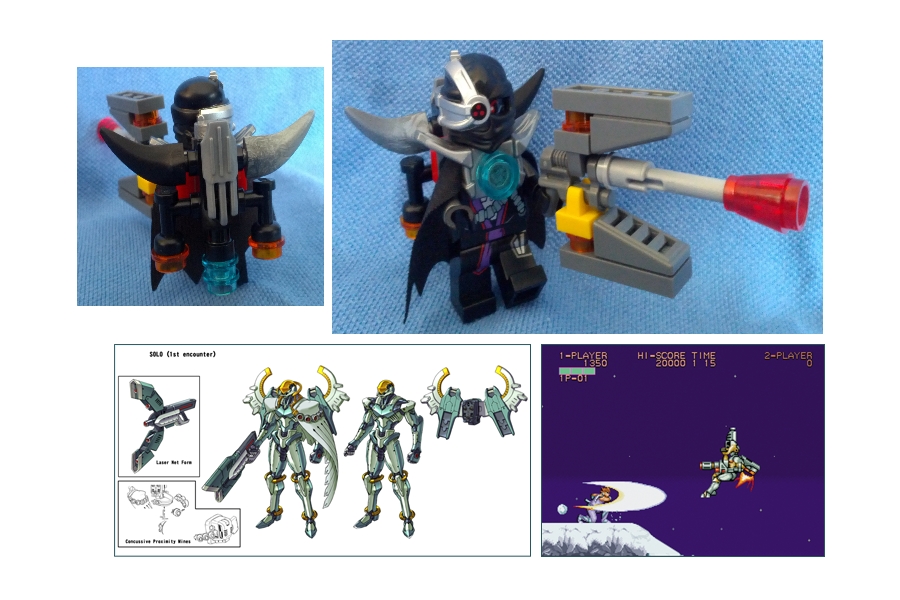 Solo min-figure with jetpack and weapon. Solo is one of the many boss battles encountered in Strider. He is a popular character and appears in at least 3 of the Strider titles (Strider, Strider 2, and Strider Hiryu). 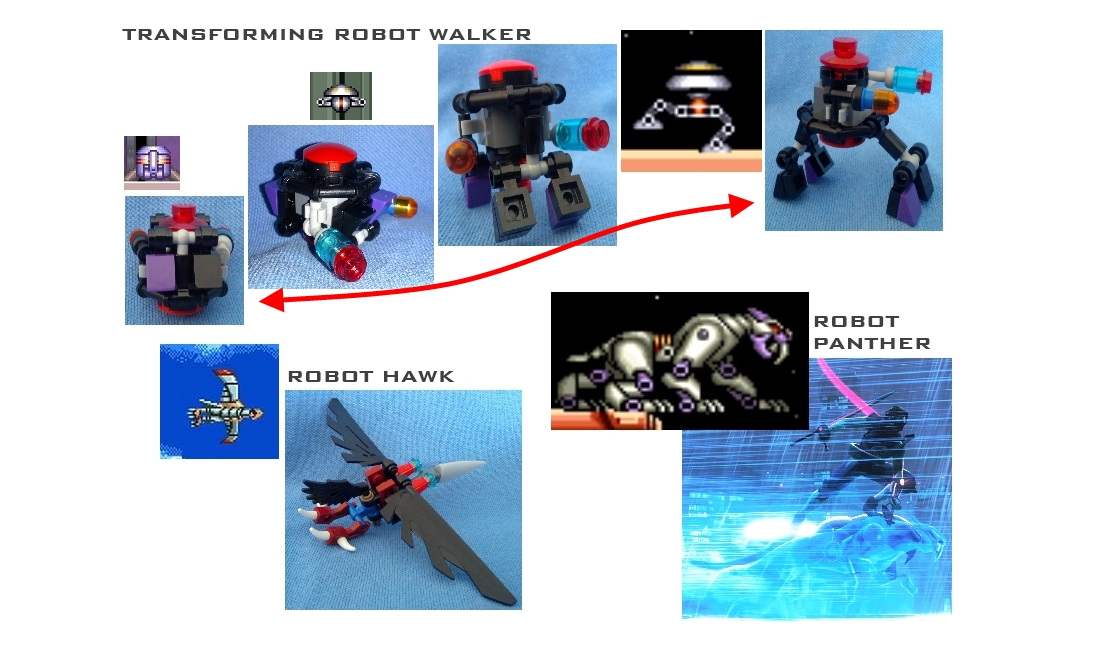 Robot Walker is one of Strider’s support robots. This robot walker transforms from ITEM BOX to FLYING ROBOT to ROBOT WALKER. The robots aid Strider in his quest for peace. They supply munition support near Strider via walking/flying around and shooting at enemies.

Robot Hawk is the second of Strider’s support robots. The hawk takes high into the skies to provide aerial support.

Robo Panther is the third support robot for Strider. The panther uses speed and melee attacks to protect Strider. Strider can ride the panther. While I did not create a model of this figure, I would envision it looking very similar to the 2014 Chima Beast Legend set 70127, Wolf, with a little more robotic look instead of the organic look. 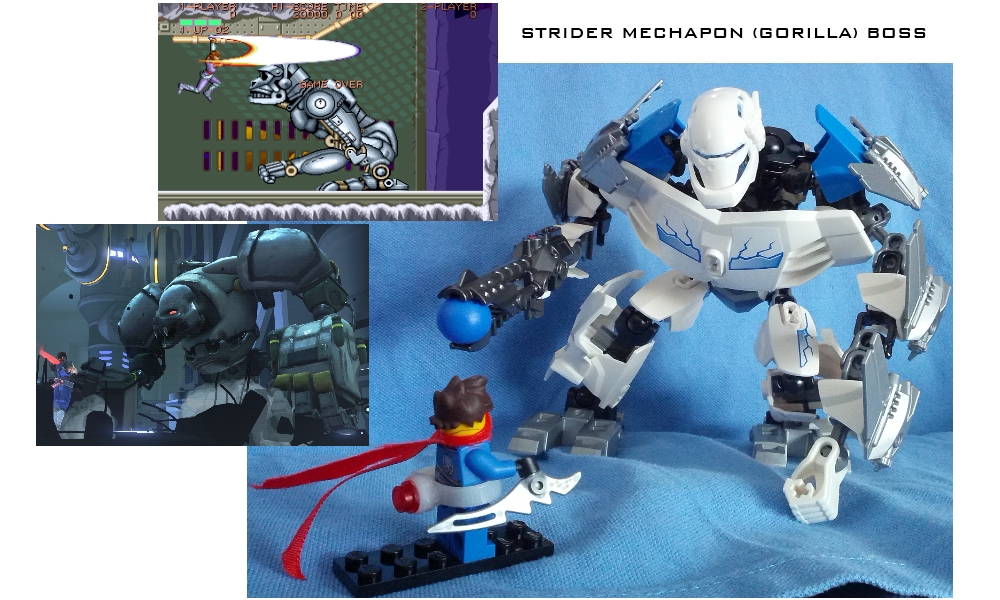 Mechapon Boss is essentially a large robotic gorilla. Mechapon appears in the Strider 1 and Strider Hiryu games. I used the Hero Factory Stormer set 6230 to create this version. I believe this is a good size in comparison to the Strider mini-figure. One could also use the 2014 Chima Beast Legend set 70125, Gorilla, set as an alternate build with a more robotic motif in lieu of the organic one.

The release of the Ninjago Rebooted sets gave me access to some parts to make the Strider set(s) a reality. I believe that Strider would fit nicely into the world of Ninjago (or a slight spin-off such as, Ninjago: The Strider Chronicles). There is a common theme here of highly skilled ninjas battling robotic forces for the greater good of all.

More Strider History can be found in this 5 minute video by Capcom:

Capcom has announced a reboot of its influential Strider series in a new game slated for Feb. 19, 2014

Capcom and Double Helix Games will release Strider digitally for the Xbox One, Xbox 360, PlayStation 4, PlayStation 3 and PC. Players will once again take control of Strider Hiryu, a ninja assassin tasked to take out the game’s main villain, Grandmaster Meio.

Strider will return to its side-scrolling, acrobatics-heavy action platform roots. It will take place in Kazakh City, a fictional Russian metropolis on a dystopian futuristic Earth. You will be allowed to explore the city, unlocking new weapons and abilities as you battle cybernetic soldiers and massive biomechanical creatures.

The original Strider was released as an arcade title in 1989, a predecessor of Capcom’s popular Street Fighter series. It has since had various iterations on the PC and multiple consoles.