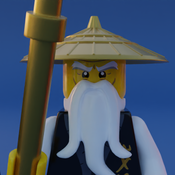 By Amaroidex z
30 comments
Relive this epic moment in LEGO Ninjago history and prepare for the final battle! This set is inspired by the temple of light from the chapter "The island of darkness" from the second season. In this episode, the ninjas transform for the first Spinjitsu Master's final battle against the Dark Lord. I decided to build this set because I always liked it as a huge Ninjago fan, this moment was fantastic. The series was released around 2011, an exciting story that remains alive to this day.
I think this would be a great LEGO set because lately Ninjago has relaunched with LEGO Ninjago legacy, the opportunity to recreate the legacy of the Temple of Light while respecting its history and foundations. In addition to the soon anniversary of ninjago, this representation means a lot in the ten years to complete the series. With this model I hope to exceed some expectations and the best recreation of the place.
The set includes:
Minifigures:
Kai.
Jay.
Cole.
Zane.
Lloyd.
Sensei Wu.
Nya (Samurai X).
2 Warriors of the stone army.
Also, their respective elemental swords.
Swords and staff.
Pieces: 1878
The set was recreated from the structure presented in the series.