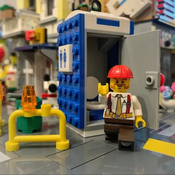 By Nastronauta
33 comments
The album "The Division Bell", by Pink Floyd, was released in 1994 and became a huge success worldwide; it contains great songs, and great guitar solos too, like the majestic instrumental outro to High Hopes that closes the album.
The main topic that links the songs is communication between people (or the lack of it): the cover itself represents this subject through two statues, representing two faces speaking to each other that find, in this verbal relationship, the way to became one (one giant face formed by the two halves).
My aim was to recreate this visual masterpiece by Storm Thorgerson with LEGO, also imagining a back structure needed to support the sculptures to stand up.
I really hope you like it and want to support this project: thanks a lot! :-)