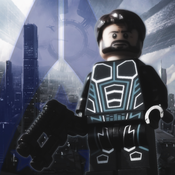 By Xingdu
66 comments
Black Falcon's Fortified Gateway
The village of Solestud, east of the Kingdom of Albrick, is under the protection of the Black Falcon's. The Fortified Gate Sergeant will only let you through for a good reason… Something to buy at the blacksmiths perhaps?
This construction includes a fortified tower with two stone levels and a third wooden level. Ladders are provided to move from one level to another. Defense elements such as arrow slit on the second level and hoarding on the third level effectively protect the wooden palisade barring access to the village. A large double-leaf door, made of iron-reinforced wood, creates an opening large enough to allow a cart to pass. The different levels of the tower can be easily removed to allow easy access to the interior. The two sections of the roof can also be removed.
After many years spent admiring the constructions of talented designers, I finally decided to take the plunge. I chose to come up with a rather modest 1118 parts build, but I tried to make it appealing. After many “just one last change”, I am happy with the overall appearance. The Castle theme is particularly close to my heart because it reminds me of my first big children's sets but also because today, I see it again with my role-playing point of view.
This construction could become a good addition for a Castle-themed village. With a reasonable number of parts, this is not the main gate of a merchant city but rather the entrance to a small village on the kingdom’s borders. Here the guard must deal with the giant rats and goblins. So, this is necessarily where the adventure begins...