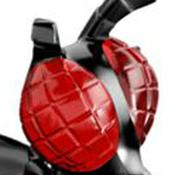 Up there, over a mountain. We remember it under a big Imperial I-class Star Destroyer ©, in Star Wars Rogue One©. This is Jedha and its skyline, the holy city where a faithful population continue to attend hundreds of temples that compose the urban structure. I tried to create the same fascinating atmosphere building a colored rock all around: it tries to reproduce the red-orange rock that we have seen in the movie when sunset hit the mountain. Jedha is dominated by a big sky scraping temple, that you can see in the right of the front image, and it has a very crowded suburbs composed by temples of every shape. In particular a lot of domes compose the skyline, domes of various shapes and dimensions. There, inside the core of the city, we saw some of the most exciting scenes, battles between our heroes and the cruel Empire.

I think this is one of the best places ever presented by Star Wars saga, and I think was interesting to make a sample in Lego bricks. Jedha infact embodies really spiritual place.

I hope you enjoyed the movie and you'll express all your force in the comment section.