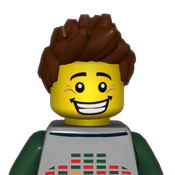 This year celebrates the 33rd anniversary of an extremely popular game that Konami released featuring Bomberman, a small humanoid robot that drops bombs to attack his enemies. Not much merchandise based off the character is available, but that's where this project comes in!

This Bomberman Project focuses primarily on the characters from the newest iteration of the franchise, Super Bomberman R. The main eight characters are the Bomberman Bros., although not all are brothers. This set includes the 6 brothers and 2 sisters to make up the group.

Features
The figures are White, Blue, Red, Yellow, Black, Pink, Green, and Aqua. Each character has distinct personalities and traits, and they can be seen through their facial expressions in each figure.

Like action figures, these buildable figures are poseable. They include ball joints in the shoulders, elbows, hands, at the hips, and feet. The head also spins, via a small axle in the center. The small ball on their heads also can be moved back and forth.

Each figure includes about 100-140 pieces, all with a similar body sculpt, but some with different head features, such as eyebrows or the bowtie on Aqua.

Future Updates
In the future, I am planning to add some different concepts. I am planning on making mosaics of some of the powerups, and possibly a display stand to showcase the figures on, although this would be quite large.

I'm also planning on creating the 5 Dastardly Bombers. These include Plasma Bomber, Phantom Bomber, Magnet Bomber, Golem Bomber, and Karaoke Bomber (with a removable mask to reveal Pretty Bomber). These might be made as a separate project, or added to this one, depending on the feedback left by you, the supporters.

Conclusion
This would be a great set for collectors, fans of the video game, or new players who are interested in starting to play! As a recent fan of the game, I couldn't wait to make these, and I know everyone will love them! Make sure to show your support and make these Bomberman Bros. come out of the video game and into the real world!