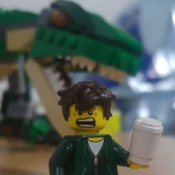 By Sawdust
50 comments
A custom unique two seated sci-fi craft that I designed to evoke both classic and modern styles, appealing to those looking for fresh new design and a nostalgic reminder of classic sci-fi.
This set was originally built as a middle ground between star wars and star trek, however began to develop it's own personality whilst I was designing it, giving it a new look and another view at what future craft might be like.
The Hollow Point is a two seated craft, with two fixed heavy cannons, two variable point defence cannons and a rear facing quad cannon that is manned by a rear facing technician. Originally built for exploration and research however is able to defend itself when needed.
This craft has no ties to any pre existing property, opening up an infinite word of imagination and creativity for the buyer. Weather or not it is someone looking for a cool new toy to fit into their own stories, or an intricate model to have on their desk.