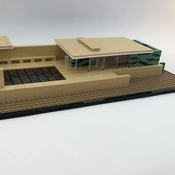 By elyoueyeass
24 comments
The Pavelló Mies van der Rohe. One of the most influential architectural landmark of the Bauhaus period build in the most iconic brick there is.
Designed 1928 by Ludwig Mies van der Rohe for the International Exposition in Spain, the Barcelona Pavilon has become a true architectural icon. The LEGO-version is true to the original floorplan and more importantly: its materiality. Mies van der Rohe used antique green marble, green Alpine marble and doré onyx for the walls of his masterpiece, beautifully embedded in the rest of the Roman travertine dominated pavilion. The different materials of the building and its surroundings are beautifully captured in various colors and techniques of LEGO bricks.
While being quite minimalist at first glance, this building impresses with beautiful details: from the pebbles in the pond to the perfectly trimmed hedges and George Kolbe’s sculpture in front of the green marble wall.
The build features a generous 32 by 60 knobs groundplate where the pavilion is placed between sand and grass in the heart of Barcelona. The two roofs are easily removable and reveal the accurate interior design.
This will look perfect on a stylish sideboard, next to the collection of your favorite drinks – maybe even next to a Barcelona chair.
A must-have for every enthusiast of design, architecture and of course LEGO!
My sideboard is already decorated with this eye-catcher.
You want one for your one? Then please hit the support-button and make this happen!
Cheers!
If you have been reading so far: thank you! After the quite glamorous text above, I would not want to miss the opportunity to give some more down to earth details about this building and its background. First of all, I have not build with LEGO for many years; this piece is my way back to beloved brick. I tried to be as close to the original as possible which was very challenging in this scale and with the limited recourses of pictures and floorplans I found on the internet. I know there have been previous tries to build the Barcelona Pavilion out of LEGO. Though as far as I know they are not as detailed and mostly miss the important aspect of materiality. I tried to pick up this in particular and to liven up the building with the different techniques and colors; inside as well as with its environment. I am happy to hear your opinion on the details and the overall building. I will upload more pictures of the not yet shown in- and exterior soon. If this build would be officially realized by LEGO, its scale could probably be compared to the one of the Robie(TM) House. By the way: “Pavillion” is not a typo but the German way of writing pavilion ;). I hope my take on this Bauhaus icon lives up to what it deserves. Tell me what you think in the comments!