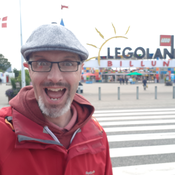 This set would follow on from existing Winter Village sets. It has great detail for display, and also a number of really fun play functions. The idea started as I wanted a chimney that Santa could actually fit down! The rest of the idea was built around this.

The snow covered Holiday cabin opens up to reveal a lovely interior, with open fire, Christmas Tree, Granddads' arm chair, bookcase, cabinet and bed. Granddad and his Nephew wait excitedly in the Cabin on Christmas eve for Santa's' arrival. The little boy hangs up his stocking and try's to look for Santa out of the window with his torch. He leaves out some treats for Santa and Rudolph and heads to bed. Santa arrives in his sleigh with Rudolph and two elves. He opens up the top of the chimney and climbs in, but wait, oh no he's stuck! One Elf carefully spins the secret wheel at the base of the chimney to remove the fire from the fire place, and the other Elf releases the trap door to allow Santa to slide in to the cabin. They leave lots of presents and does the little boy wake up and see Santa? Well that's up to you! Santa's sleigh can also be used by the little boy to play on in the snow, and can even be pulled along by Granddad and his quad bike! The family pets, the cat and dog are also around to play and a winter set would not be complete without a snowman!

I really hope you enjoy looking at the pictures, I'm really pleased with the way the set came out, from an idea in my head to a real model. I would love it if you could vote for it, and help me get one step close to my dream of being a LEGO designer!