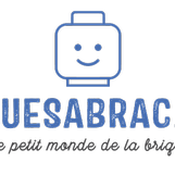 By BriquesaBrac.com
18 comments
The Pont du Gard is a Roman aqueduct located in the south of France. Built during the era of ancient Rome. This bridge was built to convey water to cities. The Romans were genius builders and allowed our generations to still be able to appreciate their constructions even 2000 years later.
I made this MOC because I live in the Occitania region based in the south of France, place where this magnificent aqueduct is built. I have always been amazed by the constructions erected under the Roman Empire which are all of genius.