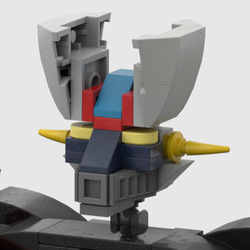 CG_Bricks
20
107
days left
Mazinger Z is a japanese enormous super robot, constructed with a fictitious metal called Super-Alloy Z, which is forged from a new element (Japanium) mined from a reservoir found only in the sediment of Mount Fuji.
It was written and illustrated by japanese manga artist Go Nagai, who found inspiration while observing a traffic jam, thinking that the drivers in back would surely love a way to bypass the ones in front. From that simple thought came his most famous character: a giant robot that could be controlled from the inside, like a car.
Mazinger Z was later adapted into an anime television series which had a big impact in countries like Italy, Spain, Mexico (Guillermo Del Toro cited it as an important influence on the "Pacific Rim" franchise) and Japan itself.
The animated series was instrumental for the 70's and early 80's boom in mecha anime (Voltron and Gundam among the others).
I built this model as a gift for my nephew, who at 5 years old is a big fan of Mazinger Z as I was when I was his age.
I tried to remain as faithful as possible to the anime version, trying to capture Go Nagai original sharped design.
This model is made of about 650 pieces, it's 35 cm tall, fully articulated and has great stability with or without the Jet Scrander, that can be easily removed.
Mazinger Z is the very first and one of the most iconic japanese mecha robot, and certainly needs a Lego counterpart that would be equally loved by several generations of Lego Master Builders.
As soon as possible I'll be working on another great japanese mecha robot created by Go Nagai.
If you like this model, please remember to support!
20
107
days left