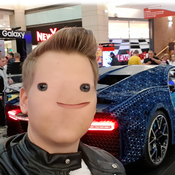 By mihalkonorbi
24 comments
This building is a micro-scaled version of The Parliament of Hungary. It's only from 331 pieces so not a huge set but perfectly fits into the architecture family.
Some information about the Hungarian Parliament Building:
The Hungarian Parliament Building also known as the Parliament of Budapest after its location, is the seat of the National Assembly of Hungary, a notable landmark of Hungary, and a popular tourist destination in Budapest. It is situated on Kossuth Square in the Pest side of the city, on the eastern bank of the Danube. It was designed by Hungarian architect Imre Steindl in neo-Gothic style and opened in 1902. It has been the largest building in Hungary since its completion.