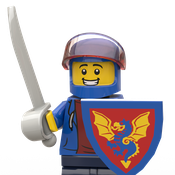 By Bright_Red_Dan
29 comments
Many years ago phones had cords.  That era ended with portable phones, which ruled for several years before cell phones arrived.  But in the last days of cord phones there emerged the coolest phone in the world.  The Clear Phone.
It was very cool for a kid to have a phone in their room.  It was even cooler to have one of those really long cords that could reach anywhere you wanted to take the phone.  But the Clear Phone was the height of coolness.
Did it have any special function that other phones couldn't do?  It sure didn't.  What it had was visible components, all bright and colorful.  Wheels and wires and gears and sometimes (maybe!) even little lights.  Why did they stop making clear appliances with awesome bright components inside?  I have no idea.  But it is about time we took another look at that age.
I think there are a whole lot of Lego fans out there who wanted one of these back in the day, and would love to get this set on their desk.