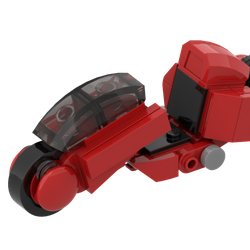 Midi-Scale X-Wing for the Microfigs

Although I didn't invent it, I was using the term ‘midi-scale’ or mid-scale for my creations before Lego introduced the midi-scale Millennium Falcon (7778) in 2009.  For me, midi is aimed at about 1/2 Minifig Scale which in old-school modelling terms from my plastic-model-kit-building-youth it is approximately 1/72 scale.

One advantage with this scale is it still allows for an accurate representation and some advanced building techniques while keeping the  models more 'playable' by those young at heart.  You can buy/build/store a lot more models in midi-scale than you can in the existing minifig scale and their size makes them easier to swoosh for those with smaller hands.  With the introduction of the microfig, this now gives you the characters that can be used alongside these models.

In some cases this scale actually brings into play a number of models (existing play-sets) from Lego that are already midi-scale.  The best examples of these are the Millennium Falcon (4504) and the AT-AT (4483), along with their various upgrades.  My Midi X-Wing is half the diameter of the 4504 Millennium Falcon, which is about spot-on scale wise going by their 'real' sizes.  Unfortunately this is where I think Lego got it wrong as they already had a midi-scale Millennium Falcon (4504), and the one they have officially produced (7778) is too small, at least by my definition for midi creations.

My idea is for Lego to produce this scale as small accurate models to provide a more accessible/affordable way to build up 'collections' of models which are more accurate than the (admittedly adorable) microfighters versions.  You can recreate the Battle of Hoth or the Battle of Yavin using my midi-scale models without breaking the bank or your storage space at home.

I’ve always enjoyed working in this scale and don't seem to be running out of inspiration anytime soon so feel free to give me a vote if you would like to see such sets.  This idea is only for one of most iconic Star Wars ships, the X-Wing, but you can see a number of models at this scale in my Flickr feed.