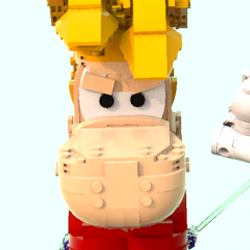 Here is the second set on Rayman Origins, a video game created by Ubisoft where Rayman and his hilarious friends save the teensies (joyous blue beings with a big nose) from Polokus’s nightmares.

I made this set because the theme was original and popular, but also because I really like Rayman and his friends who are unique. You can help by voting for this project (blue support button). The goal is 10.000 so every vote counts! Please tell your friends about this project or share on social media. I will make other sets in this theme, but let’s look at the set itself.

The total amount of bricks used is 1070. The set is composed of Rayman (legs, arms and neck articulated) with a BIG fist and a teensy. I made Grand Minimus but it is just an example: YOU will choose which teensy you would like to have.

How do we vote?

You just have to write your most favorite teensy in the comments. I will make the most popular as soon as I have one.

Here are the teensies you can choose (you can see their appearance in the internet):