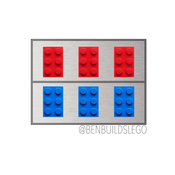 Celebrate the historic neoclassic home of one of America’s most famous Founding Fathers, Thomas Jefferson!

Thomas Jefferson’s Monticello home began construction in 1768, when he was only 26 years old.  America’s third president was never fully satisfied with his design, and the house was continually redesigned throughout his lifetime - not so unlike Lego fanatics constantly reworking their own builds.

This microscale Monticello has been meticulously and faithfully rendered to capture the unmistakable appearance of the iconic building, known to all Americans as “that building on the back of the nickel coin.”

The 930-piece set would appeal to lovers of Lego’s Architecture series, and would also contain highly sought after dark red pieces that have never before been produced.  The design could also be scaled down to remove the some of the landscaping (the house by itself contains under 650 pieces).

If you love architecture, history, and Lego, I would be forever thankful for your support!

“I am as happy no where else & in no other society, & all my wishes end, where I hope my days will end, at Monticello.” – Thomas Jefferson, 1787