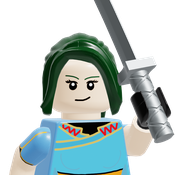 By LegoGuy03
10 comments
The Fire Emblem series, while not quite as popular as other games, has recently grown to become one of Nintendo's biggest franchises. Its mobile title, Fire Emblem Heroes, has especially become profitable for the company, being one of their most successful titles on phones. With interesting stories, unique and compelling strategic gameplay, and hundreds of lovable characters, it's not too hard to see why Fire Emblem has become so beloved despite its initial obscurity.
This set in particular is based on the Aether Keeps, where you can send out your units to fight enemies to increase your Lift or go to the Aether Resort where your Heroes can hang out together. I primarily chose this mode as it provided the most opportunity for playability.
The set includes:
Let's get this to 10,000 for the possibility of LEGO Fire Emblem becoming a reality!