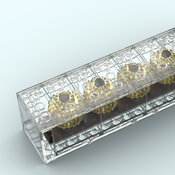 By PolarisRK
23 comments
Majestic, Classical, Masterpiece.  This is Leica M series cameras.  Leica is the first company which made small portable camera compatible with 35 X 24mm film format.  The first M series camera Leica M3 is popular one for being used by well-known photographer Henri Cartier Bresson. lots of photographers. journalists opted for the Leica M3 which were revolutionary in 1950~60s. It had been sold 220,000 from 1953 to 1966 and price of used one is more than a thousand dollars. Also, some of Pulitzer prize winning and nominated photographs were taken with Leica M series cameras.
After the discontinue of M3, Leica hit another M series named M6.  In 1975, Pentax has made the first SLR (single lens reflection with pentaprism) camera. after that, Canon, Nikon, Olympus, Pentax which opted for SLR systems were dominating camera market share during 1980s. at that time, Leica M6 was released with dominating performance and hugely small size respective to SLR cameras. So Leica M6 ranked the second on total sell amount after Leica M3.
Leica M series camera are still being manufactured with digital full frame CMOS sensors and retro design with LCD. M mount and manual focus system are still in Leica M10 which has released in 2018. even if it costs more than ten thousand dollars, they are still popular among professional and amateur photographers
The exterior of Leica cameras have not been changed so much from M3. red logos are added at the  top, little changes of viewfinders, change from flim to digital, video functions are all of the changes.  the feeling of taking photos, M mount lenses, stiffness, small size and expensive price still remain as features in contemporary Leica M cameras.
As a commemoration of these Leica brand and its camera products, I've decided to make miniature of them with lego. after making one model (Leica M type 262), I thought building another model is pretty simple. so I made M3, M6, M10 consecutively.
There are Leica M3(right at the first image), M6(left), M typ262(behind), M10(in front)
Film-using products(M3 and M6) do not have screen on back of the camera. there are iso(sensitivity of film) selector which is used for indicating iso of the flim in the camera. they are reproduced with 2X2 round tile.  I use 2 X 4 curve brick as side curve of the camera, and made rangefinder which is the main symbol of Leica camera with brackets. Also down There's a teardown shot of this lego camera.
Leica M series are compatible with M mount system. it only provides manual focus system and choosing aperture is manual too. But it has small size compare to SLR lenses and there are a great deal of great lenses accumulated since 1953.  I modeled Summicron 50mm F2 Asph. lens, Summilux 35mm F1.4 Asph. lens, Elmarit-M 24mm F2.8 Asph.lens. dishes and technic wheels, bars are used to describe lens. all of them are compatible with each other.
Thanks for reading and supporting!