The Great British Bake Off 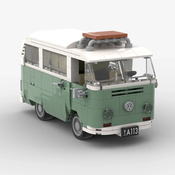 By timoth_e_e
109 comments
"On your marks...
get set...
bake!"
This is my rendition of one of my favorite shows, The Great British Bake Off. There are so many things I love about the show and I wanted to see it in LEGO so here it is! My family and I love watching this show when everyone is home for the holidays and we love the iconic characters, amazing bakes, and hilarious hosts.
Details
I tried to recreate iconic moments from the show, such as Paul and Prue judging a technical challenge, the bakers waiting for Star Baker results, taking a bake out of the oven, one of the bakers getting a coveted handshake from Paul, and Noel joking around with one of the bakers with Mr. Spoon. There are many accessories and little details such as the Union Jack flags hanging around the tent*, ingredients and utensils for a showstopper bake on the counters, the cake stand trophy, and lots of background details. I tried to recreate as closely as possible the set of the show, including the furniture, the plants, the string lights, various decor, and cakes. The crew's corner of the tent includes two shoulder cameras and a tripod, two boom mics, and two posable lights.
The model is about 2800 pieces, but can easily be scaled down by changing the amount of counters/bakers. The way I have the tent set up is for six bakers with four large counters and two smaller ones. Each of the counters are equipped with an oven/stove, a proving drawer, four storage drawers, a mixer, and (for the large ones) a sink.
Playability
The two sides of the tent are hinged and can fold out/in for easy playability or display. The front of the tent is broken up into two sides: the crews corner (which is never actually shown on camera) and the judges table. Both of these sections can be attached either to the front of the set for playability or to the back of the tent for a better display.
This set is meant to be very playable; the refrigerators and freezers open and close and have space for a 2x2 custard (or dough that needs proving), the counters and bakers can be switched around and mixed up for various combinations, and the ingredients on the counter can be switched out depending on if the bakers are working on a technical challenge or a showstopper. There is a Gingham Altar for the bakers to place their technical behind their photo to be judged and a showstopper table where Paul and Prue dish out judgements (or handshakes) to the bakers. (Hopefully there are no soggy bottoms or claggy sponges.) The idea is to be able to recreate almost any of the moments from the show with this model.
Minifigures
There are 21 minifigures in this set, the primary ones being six of the bakers from the most recent season, along with the judges and hosts. I thought it would be cool to also include characters from multiple different seasons, so that the builder can mix and match their favorite bakers. I also included several crew members, who do a fantastic job capturing all of the little moments and nuances that make the show so good. Referencing the last photo, from left to right and top to bottom the minifigures included are:
I think this model would be a fantastic addition to any Lego collection either as an amazing display piece or for its playability. With its instantly recognizable features and characters, the Great British Bake Off has a special magic that I think would translate well to Lego. I think one of the things that makes the show so special is the way it is always centered on the journey of the bakers, and captures the genuineness and moments of connection - and this model is a celebration of that.
If you've read this far and want to see this become a real Lego set please consider supporting, and share with your friends!
*I used Stud.io to build this model and one of the frustrating limits of the software is that the strings with bars on them (part no. 63141) are not posable. To take their place in the render and try to communicate the effect, I used string with studs on the ends that are the same length that can hang down. In the render the flags appear to be floating, but if this build were realized obviously the strings used would have the bars to attach clips to them.