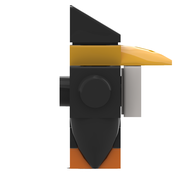 Here's a modern sportscar with interesting doors and a V8-engine under the hood. The door slide out and forward to make room for entering the detailed interieur. Inspired by the Bugatti Chiron it has a taillight over the whole width of the vehicle as well as triple headlights on each side. Apart from the white details reaching arcoss the car, onto the seats as well as the wing mirrors, it has a rather large rear wing for additional downforce.

I love cars as well as Lego, just like many people do, so I decided to combine these passions to one. Starting off with a 3D model using LDD and the use of rather common parts I tried making the best sportscar using certain aspects from many popular reallife vehicles I have small models of.

Due to the rather slim amount of modern cars built of system bricks inside the current Lego world I believe, lots of people would love to see something like this becoming a real thing.