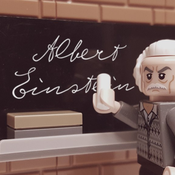 The police (Seargent Rools and Detective Annalyse) receive a call that someone has robbed a bank. When they arrive, they find that the suspect (Robin) has already been apprehended by the infamous vigilante known as Crim(e)son. Still on the scene, the vigilante is about to escape, and the Seargent and Detective must act quickly to arrest Crim(e)son before it's too late.

* a street light attached to a traffic light

I really like this idea for a set because the vigilante isn't presented as this obvious hero or villain whose backstory you follow, but rather whose identity and mission is a mistery that the police, who in this case are presented as relatable protagonists, must solve. I hope this set idea becomes a reality because I really enjoyed building and designing  the cars, the characters and the story behind it all.