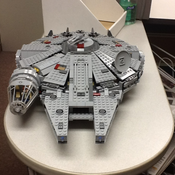 I would like to propose the Star Wars A-Wing Fighter Maintenance Hanger Bay.

I have collected Star Wars Lego for a few years now and really enjoy it.  My only problem is that often the smaller ships in my collection get lost against the bigger, more detailed sets.  What I would like to see is a production run of add on display sets that can really bring some presence to the smaller ships.

My presentation to you is a custom built hanger bay specifically for the A-Wing Fighter.  This is the current Lego A-Wing Fighter available in stores today and it was a really interesting and fun build.  However, it was lost in my collection as it just doesn't stand out against x-wings and tie-fighters.  I believe the ability to purchase the hanger bay or have it included in future sets would greatly improve the presentation and playability of the A-Wing Fighter.

The Hanger Bay could also look great with other Lego space themes as well.

This build features an elevated platform, lower level diagnostic computers, hazard marked landing area, tool/weapon storage, guard rails, fueling station, a ladder and an overhead hanger support.  I believe this new set really brings the A-Wing to life and brings it to par with other ships in the Star Wars Lego line up.

I appreciate your support and I am excited as this is my first ever submission.