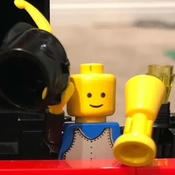 By HelloKastle
27 comments
The Foresters have found a new hideout deep in the woods! This time it’s more than just a fortified hollow tree. It’s an ancient cave system with a secret entrance behind the misty Black Oak Falls.
I built this to give the Foresters a more interesting and spacious home base.  It would make a great LEGO set because it’s set in an environment of dynamic natural beauty that can change with the seasons. Also, the underground space can spur the imagination to new adventures and exploration.
Drawing inspiration from the classic Camouflaged Outpost set, this new outpost has several familiar features:
The black oak is unmoved by time, contrasting with the changing autumn season and a misty waterfall flowing over a cliff of multi-layered rock. Perhaps Robin Hood and Maid Marian will make a daring escape through the secret door behind the waterfall.
The stream and falls are of crystal clear water, transitioning to shades of blue in deeper areas.  Perhaps a trout rests there. The ripples catch glints of moonlight as the horseman is out on midnight patrol.
The cave roof is removable to access living quarters. The columns and arches and other details in the cave suggest an ancient origin, perhaps hewn by elves or dwarves of yore.  The open design hints at further tunnels deeper underground.  How far do those tunnels go? What mysteries and treasure are hidden there?  That adventure is left to your imagination…
This set includes the same complement of minifigures as the original Outpost: six foresters and a brown horse.
The colorful chalk backgrounds are by my talented daughter. She also graciously allowed me to use many of her bricks for this build!
Thank you for your support.