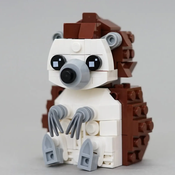 By Vincent Kiew
104 comments
*A Regal Bond*
I built this Lego set to celebrate the special bond between Her Royal Majesty Queen Elizabeth II and her adorable corgis.
Since introduced to one at the tender age of 7, the Queen has owned more than 30 corgis and is known to be one of the longest-established breeders of Pembroke Welsh corgis in the world.
Her first corgi - Susan - was so loved that she accompanied Her Majesty and The Duke of Edinburgh on their honeymoon.
Even more remarkable, Susan’s 14th descendant - Willow - starred together with the monarch and James Bond at the opening ceremony of the 2012 London Olympic Games.
However, it was reported in 2015 that Her Royal Majesty decided to stop breeding corgis as she didn’t want to leave any of them behind when she is not around. While it’s sad (the reality of mortality), I salute the Queen for wanting to be by the side of her best friends.
A rare breed of kinship like this deserved to be cherished. Especially one that spanned over 80 years.
Let’s vote for this project. Thank you!