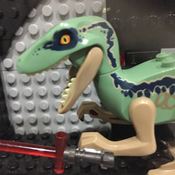 By TitanicBricks
29 comments
I'm sure you'll recognise this from the amazing Blue Sky film series: Ice Age. This model doesn't have any minifigures, instead I've used buildable characters. Overall, it's made up of a poseable Sid the Sloth figure, a slightly poseable Scrat figure and an Iceberg platform for them. I was originally going to use minifigures instead but I realised that Sid and the Scrat were quite recognisable and nice looking as action figures, so I hope this will appeal to the many Ice Age fans out there. This project has 339 pieces and was made digitally based on a Sid the Sloth figure I made with real LEGO bricks a few years ago, I had an awesome time building it both with real LEGO and online. I hope you like it.