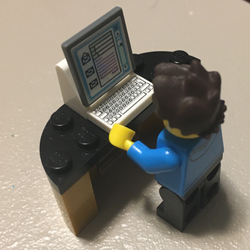 LEGO H A C K E R
22
Shadow Knight is a spaceship that is part of an evil organization that destroys planets. Its evil pilot Jesper faces off against Max and his spaceship Planet Whisperer trying to protect the planets in an epic space battle. The fate of the galaxy is in their hands. Who will win? Only you will decide.
I built this build because I was trying to create a nice, cool looking spaceship and made Shadow Knight and thought it needed a good guy so I created Planet Whisperer based off the types of different planets: water, greenery, snow, and volcanic/fire.
I believe it would make a great LEGO set because it had 2 great looking spaceships one is a good guy and the other is a bad guy, with no outcome based on a movie, book, etc. So, people would get to choose who will win, Shadow Knight and Jesper or Planet Whisperer and Max.
22