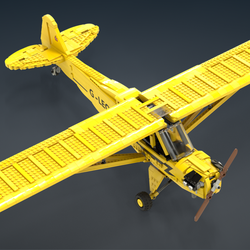 The Gee Bee model R is probably one of the most unusual racing aircraft to emerge from history. Based on the popular but scientifically false concept of streamlining in the 1930s, the aircraft was built to resemble a teardrop to maximize its speed. It actually was fast and won the Thompson race in 1932. However, its high power Wasp engine placed in such a small craft made it difficult to handle, and a number of fatal crashes destroyed all the original models and gave the aircraft a dangerous reputation.

This is actually an update of a 2011/12 model I originally posted on cuusoo. It is 1/40 scale and features: