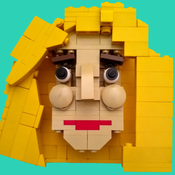 By theadventuresofzula
9 comments
This idea is based on the comedy TV show Psych which aired on ABC from 2006 - 2014 (and is now on
NBC's Peacock) as well as has two movies (2017 and 2020).
The set includes the Psych office (simplified - more on that below), the Blueberry, 4 minifigures, a
shaved ice cart, and lots of little details, Easter eggs, and of course a pineapple!
It includes enough details and characters that it would make a great set to display while you rewatch the series, or you can make your own mysteries for Shawn, Gus, Jules, and Lassie to solve.
As I have designed it, this set comes in at just under 1000 pieces (995).
The base measures 28 x 28 studs and at its highest point is 11 bricks tall.
Minifigures:
* Shawn Spencer
* Burton "Gus" Guster
* Juliet "Jules" O'Hara
* Carlton "Lassie" Lassiter
The minifigure faces and bodies are hand-drawn because I did not find any already-existing pieces that
fit what I wanted for the characters (so please overlook the flaws!).
I took some artistic liberties with this set to improve playability as well as making it more realistically
sized to be a Lego set. Specifically, I condensed the office into one room (choosing to focus on the main
room), which meant some details had to be shifted (like the TV and the fridge/mini kitchen).
The roof is mostly nonexistent, except for an edge to give the impression of a full roof without adding
the complexity and reduced playability that a full roof would impose. The exterior walls are white as
they are in the show, but originally the interior walls were tan on the top half and green on the bottom.
However, I sacrificed accuracy for improved buildability and playability so instead of adding double
walls, I left the top half of the interior walls white.
I also added an (optional) shaved ice cart that can sit outside the office for mid-case snack breaks,
because it wouldn't be Shawn and Gus without snack breaks!
The shaved ice cart doesn't include a minifigure to run it, but it features enough pieces (stored in a compartment on the back) to make a couple of different flavored shaved ice treats and little details like a
cash register, scoop, and umbrella.
The Blueberry has its own parking spot right next to the office, and the planters that run alongside the
building and the front windows are included, as well as the palm trees out in front of the office.
In addition to the bright green and white sign that reads "Psych Private Psychic Detective" on the front window, there is a sign with white words on a dark green plaque on the side of the building above the
Blueberry and a hanging double-sided sign that features dark green words next to the door.
Inside the office itself there is a coat tree next to the door, and two tan sofa chairs for clients, or in this
case Lassie and Jules, to sit in. Shawn's desk is relatively messy with things stacked on top of each other and a takeout coffee cup on the edge of the desk. Gus's desk is neat and tidy with everything in its place.
I modeled both of their chairs (Shawn: large black office chair and Gus: blue office chair) after the ones
featured in the old Psych interactive office.
I reduced the kitchen to just the small white fridge and a little table with a teapot and a couple
containers on it.
The foosball table was also condensed to save space, but I thought it was important enough to include
regardless. I placed the TV in the corner for the same reason.
Below are the specific little details and Easter eggs that I included. If any detail is from a specific episode, I put the season and episode in brackets next to it.
Details:
* Blueberry license plate
* Lassiter's gun
* Juliet's handcuffs (not pictured)
* Shawn's dual-sided face (one side with the "raised-eyebrow-psychic-vision" face)
* pineapple
* "you hear about Pluto?" poster
* Gus' wizard's wand [S8:E1]
* dartboard
* Gus' 6th place bowling trophy [S8:E5]
* Gus' bowling ball bag [S8:E5]
* Gus' pharmaceutical briefcase
* Gus' lavender oil [S2:E15]
* Gus' desk nameplate
* Gus' computer screen featuring a news page
* newspaper
* empty nacho bowl
* Shawn's toy car
* Shawn's video games
* Shawn's computer screen featuring search results for "raccoons in Santa Barbara"
* Shawn's painted portrait [S2:E14]
* Shawn's motorcycle helmet
* Chinese takeout boxes
All the graphics are made by me, so they are not perfect by any means but just an idea of what I would want the final designs to look like. They are included all laid out in one of the pictures.