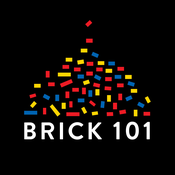 By BRICK_101
14 comments
When anchors Phil Brickley and Sherry Tiles need to report on a breaking story, they travel in the NNN Newsmobile. This versatile vehicle transforms to traverse any terrain and can serve as cameraman with its robotic arms.

Phil and Sherry built the Newsmobile themselves and handle all maintenance and part swapping. It is a perfect reflection of their personalities: it is strong and dependable like Sherry, but also whimsical and resourceful like Phil. 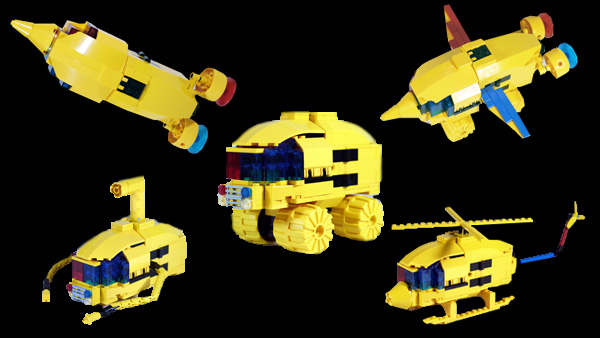 When going underwater, Phil and Sherry ditch the wheels and add the periscope and grabbing arms. Sherry lets Phil steer underwater and so she can focus on looking through the periscope to warn him when he's about to hit a whale.

The Newsmobile's helicopter mode is very useful for short flights around New Block City, especially when

on the roads. For intercontinental travel, the Newsmobile transforms into a supersonic jet. Phil has started shouting "" every time they break the sound barrier.

When news beckons from the far reaches of Space, Phil and Sherry boldly go there in rocketship mode (always packing plenty of freeze-dried pizza). 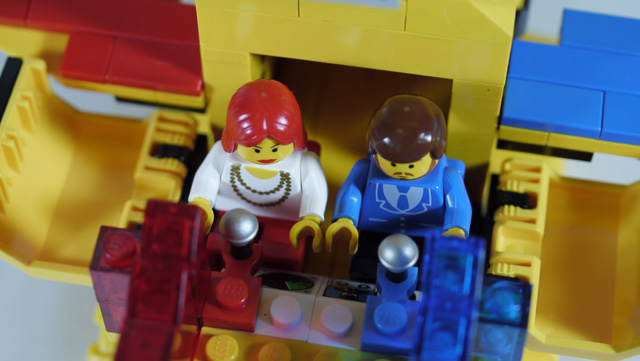 Phil and Sherry each have a computer control panel in the cockpit. They keep their microphones handy so they can start reporting when they jump out the side hatches. The cockpit's roof flips open for when they have to eject (this happens more than Sherry would like). 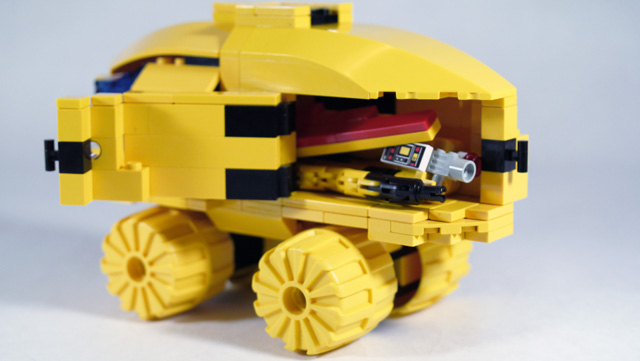 The back opens up so they can store extra parts of the Newsmobile when they aren't using them. Sherry wishes Phil would be more careful when he puts things away in the trunk, but he claims it's no fun unless you jam them in. 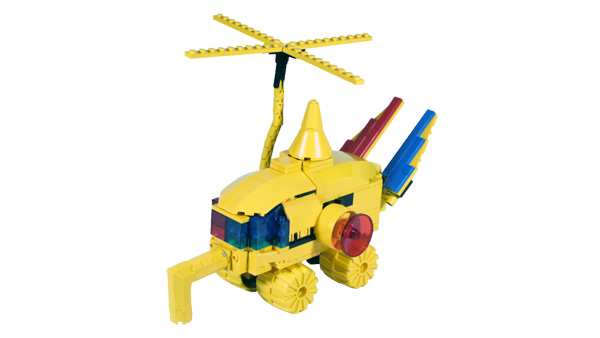 Some of the Newmobile's configurations are very strange.

The Nightly News at Nine is my animated webseries about a wacky news team in a world made of plastic bricks. As the news anchors, Phil and Sherry are the heart of the show: a bickering couple that often lets their personal problems take precedence over the news. Other members of the NNN team include a sportscaster who is actually an evil villain

to destroy the city, a crazy robot--princess who serves as the field reporter, and a flamboyant dragon who reports on . The best introduction to the series is watching Chapter 1: "New Beginnings."

I've been tinkering with the idea of an NNN project on Cuusoo since it launched in the US last year. I would have loved to do a project that included all six of the main NNN characters, but I realized that I needed to think of the set like a real LEGO set, and they never let you get all the cool figures in one set. If this project is a success, then I will develop other Cuusoo projects for the rest of the cast.

Once I decided to focus on Phil and Sherry, I had to decide what kind of set to put them in. I toyed with the idea of doing their news desk and studio backdrop, but that would make for a pretty boring LEGO set. My next attempt was a yellow semi-trailer truck that contains a mini version of the NNN studio in the trailer. However, after building it, I decided it wasn't enough fun. Nor did it capture the spirit of adventure that is so vital to NNN and my favorite LEGO sets. (Also I realized it looked a whole lot like this current LEGO set.)

I started from scratch, but this time, before I started building, I gathered inspiration from some of my favorite fictional vehicles and my favorite LEGO sets as a kid. The influence of the Crystal Explorer Sub and Flying Time Vessel should be quite obvious in the new design. Those familiar with the LEGOLAND Idea Book will also recognize Phil and Sherry as spiritual successors to that book's Bill and Mary. My greatest hope is that NNN and the Newsmobile will inspire in others the same wonder and creativity that idea book did in me.

I would be remiss if I didn't take this opportunity to thank my fan community. Over the past few years the NNN YouTube channel went from having 0 subscribers to having over 5,000. Seeing all your comments and video responses and meeting you at LEGO fan conventions has changed my life. You validate everything I do and keep me motivated to continue making new animations (though never as quickly as we hope). I wouldn't be putting this project up here if I didn't believe you can make it successful. Thank you, thank you, thank you.

Now let's do this.

EDIT: Apparently I didn't make this clear enough above, but the set would include Phil and Sherry minifigs. They may have to be modernized by LEGO to keep in line with current minifigs standards (e.g. eyes with pupils), but hopefully their spirit will remain intact.

EDIT 2: Swapped out some of the pictures to better show off the interior.

EDIT 3: Ninjanikpic pointed out that I didn't put the NNN logo anywhere on the Newsmobile. This is a big oversight, so I made this adjusted image to show how it might go on the side as a sticker.